Healthy Lee Chung-yong gets the call

Healthy Lee Chung-yong gets the call 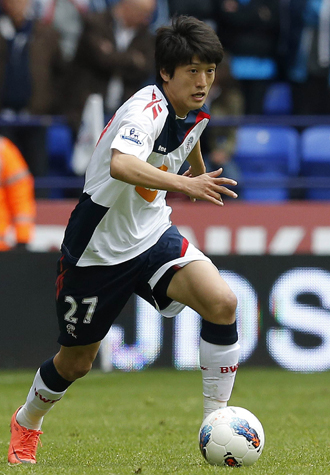 Lee Chung-yong of the Bolton Wanderers will join the Korean national football team ahead of the team’s third preliminary match against Uzbekistan for the 2014 Rio de Janeiro World Cup next month, The Ilgan Sports, an affiliate of The JoongAng Ilbo, reported yesterday.

Lee, a 24-year-old right winger who is one of Korea’s best players, did not play in the first two preliminary matches for the World Cup team due to an injury he sustained last year. In the past week, Lee has played full-time during the first two regular season games of his English Championship League club.

“Coach Choi Kang-hee will summon Lee Chung-yong in the third preliminary match against Uzbekistan on Sept. 11,” a source familiar with the Korea Football Association, told The Ilgan Sports. The KFA plans to send a letter to Bolton soon, the source said.

Under FIFA rules, the KFA must summon a player from the club he currently belongs to no later than 15 days before the match it wants him to play. The Choi squad will begin preparing for the Uzbekistan match on Sept. 5.

“Lee Chung-yong is playing full-time with his team, and it is good news for the national team,” Choi said. When asked about whether or not Lee would be playing the Uzbekistan match, he said that “it would be possible unless there is some variable.”

Lee has missed A-match games for Korea since the tune-up match against Ghana on June 7 of last year. He suffered a serious injury to his right shin during his club’s preseason match in July 2011.

Cha Du-ri, a Korean defender playing for Bundes Liga’s Fortuna Dusseldorf, said the injury and Lee’s ensuing absence from the national team was “a blow to Korean football.”

After a 10-month absence, Lee returned to his English club in May. It was near the end of the season, and Lee only played two games as a replacement.

Coach Choi thought his adjustment to the club and regaining his form would be a priority for him and did not summon him in the first two matches for the national team, although he badly wanted Lee to play from the start of the World Cup campaign.

On Tuesday, Lee made a full-time appearance in the club’s second season match against Derby County. He also played full-time in the season opener on Saturday against Burnley.

In the two matches, he proved that he was fully recovered from injury and recorded two shots on goal.

The club had eight preseason matches and Lee played in seven of those games.

If Lee joins the national team, he is expected to compete for a wing position along with Lee Keun-ho of the Ulsan Tigers and Kim Bo-kyung of Cardiff City.