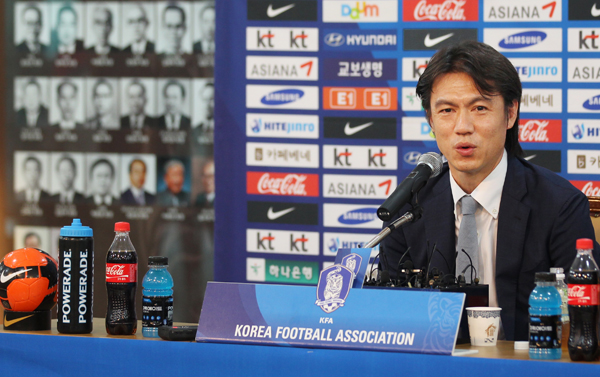 Hong Myung-bo speaks during a press conference in Seoul yesterday at the end of his tenure as the Korean Olympic football coach. He has been rumored to be a leading candidate to coach the 2014 World Cup. [YONHAP]


Korea’s Olympic football coach Hong Myung-bo said yesterday that he was disappointed by the Korea Olympic Committee’s decision to exclude Park Jong-woo from a welcoming reception for his team after returning from the London.

Speaking at a wrap-up press conference at Korean Football Association headquarters in Seoul, Hong said Park’s “significant contribution” to winning a bronze medal during the Olympics should be recognized.

“We were together from the beginning and I thought it was not right that he couldn’t share the final moment,” Hong said.

Park, a 23-year-old midfielder, is under investigation by FIFA, the football’s world governing body, for holding the banner “Dokdo is our land,” referring to Korea’s easternmost islets that are also claimed by Japan, after a 2-0 win over Japan in the bronze medal match.

The KOC and KFA have explained to FIFA that Park was carried away in the heat of the moment. Still, they excluded him from various welcoming events, for fear it could adversely affect the FIFA investigation.

Hong said he called Park on Aug. 12, the day his squad returned to Korea, and encouraged him to attend a banquet for the team the next day. Park was at the second banquet, which was held at the Shilla Hotel.

Hong also criticized the KFA for sending a letter to its Japanese counterpart on Aug. 13, which made headlines for its apologetic tones. “I think they should have made a prudent and precise judgment with regard to the matter of sending an official letter to Japan,” Hong said.

The 43-year-old coach continues to stress that Park’s action was not premeditated, instead it was an emotional response to the victory. Such an act prepared in advance would have hurt Seigo Ikeda, the team’s Japanese assistant, he said, adding, “I think the FIFA will make a wise judgment on it.”

Hong said facing Japan was an added incentive for players beyond the exemption from mandatory military service given to Olympic medal winners. Japan had a strong team, he said, but he knew his players would show the determination they often do against their rival.

Regarding some of his players’ possible moves, including Ki Sung-yong of Celtic, who is poised to join Swansea City in the English Premier League, Hong encouraged them to pursue their overseas careers but advised that the players prioritize their potential over the fame of the clubs or money.

“If they move to a team where they can secure a playing time on the pitch, they will be able to display a good performance and make a big contribution to Korean football,” he said.

After ending his three-and-a-half year tenure as Olympic team coach, Hong is being mentioned as a candidate to take the helm of the Korean squad during the 2014 World Cup. Choi Kang-hee, the current coach, has said he intends to return to Jeonbuk Motors after securing Korea’s eighth straight berth to the World Cup. Korea’s final preliminary match for the 2014 World Cup is in June 2013.

He said he feels burdened by the rumors swirling around him and that right now a rest is his biggest priority. He said he is considering overseas to study, with England as one of several destinations in mind. “After the break, I will have to do a new experience,” he said.