Playoffs up for grabs as KBO begins stretch run

Playoffs up for grabs as KBO begins stretch run 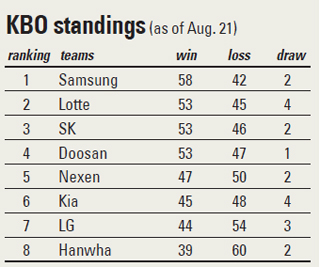 Three-quarters of the way through the KBO baseball season, it remains a guessing game as to who will be the pennant winner and what other three teams will make it to the playoffs with about 30 games left to play.

If there is any sure bet based on the season so far, it just might be the league-leading and defending champion Samsung Lions, who swept a three-game series against the Doosan Bears late last week.

Samsung manager Ryu Joong-il has set 75 as the minimum number of wins for his team during the regular season, and the goal would be met if the Lions can win about half of their remaining regular season games.

It would also, in all likelihood, be good enough for Samsung’s sixth pennant.

But the rest of the post-season field is up for grabs and the other top tier teams are mounting intense challenges, led by the Lotte Giants, who are scheduled to wrap up their three-game series against the Lions today.

The second-place Giants cut the Lions’ lead to four games Tuesday, rallying for a 5-3 win on Hong Sung-heun’s grand slam in the eighth inning.

The dramatic victory gave the Giants a three-game winning streak and some momentum going into this weekend’s series against the Doosan Bears on the friendly home turf of Sajik Stadium in Busan. The game scheduled against the Lions yesterday was rained out.

Lurking in the wings are the third-place SK Wyverns and fourth-place Bears, who trail the Lions by 4.5 games and 5 games, respectively.

Doosan boasts some of the league’s strongest pitching. The Bears staff has recorded 59 quality starts this season, the most among the eight KBO teams.

A quality start is when a pitcher completes at least six innings during a game but allows for no more than three earned runs.

The Wyverns, a team which was a surprise doormat in the early part of the season, jumped into third place with a three-game sweep of the Kia Tigers last week.

The star players of the three-time champions, Chae Byung-yong and Kim Kwang-hyun, are pitching solid, but the Wyverns also lead the lead with 82 home runs as a team.

“If we avoid injury, I think we will advance to the playoffs,” Lee Man-soo, SK manager, was quoted as saying by MBC.

The fifth-place Nexen Heroes and sixth-place Tigers are desperate to catch the fourth-place Bears, which both trail by 4.5 games. Nexen finished the first half of the season in third place and the Tigers had lost seven straight games through Tuesday.

The Heroes will face the Wyverns at home in Seoul for three games starting tomorrow. Tuesday’s game between the Heroes and Bears was rained out.

The Twins and Eagles were 13 games and 18.5 games, respectively, behind the Lions through Tuesday.