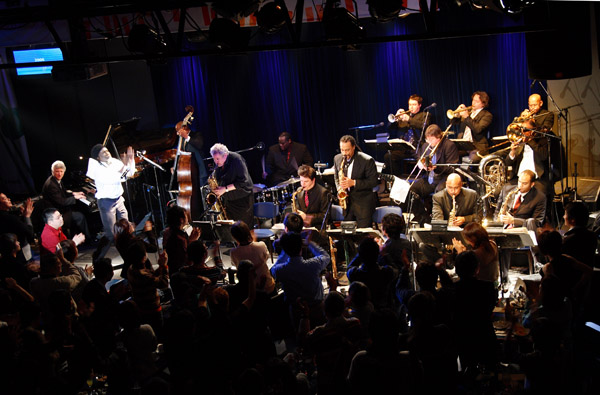 A New York-based jazz ensemble, Mingus Big Band, is visiting Seoul to perform on Sept. 7 at the LG Arts Center in southern Seoul as part of its Asia tour. Provided by the organizer

The National Theater of Korea,

Aug. 30 and 31: The concert mainly involves a variety of traditional Korean musical instruments, such as the gayageum, a Korean zither-like 12 string instrument, and daegeum, a large transverse bamboo flute with a buzzing membrane.

Sept. 7: The Mingus Big Band is a jazz ensemble, based in New York City, that specializes in the compositions of the late Charles Mingus. The band has received six Grammy nominations and won a Grammy in 2011 for Best Large Jazz Ensemble Album for “Mingus Big Band Live at Jazz Standard.” For this Asian tour, the band is also composed of saxophonist Paul Foster, trumpeter Alexandre Sipiaguine and pianist Helen Sung.

Sept. 8: Following the success of shows in 2010 and 2011, Park Concert will present another elite lineup. Japan’s Yuhki Kuramoto, Canada’s Steve Barakatt and Korea’s Yiruma have collaborated to present “Piano Paradiso,” and the audience will hear Kuramoto’s “Lake Louise” and “Romance”; Barakatt’s “Rainbow Bridge” and “The Whistler’s Song”; and Yiruma’s “When the Love Falls” featured in the megahit drama “Winter Sonata.”

Sept. 10: Miracle Eyes Concert will be performed by flutist Bae Jae-young, pianist Yoo Ji-soo and violinist Kim Jong-hoon. Kim has been visually impaired from a young age, but that did not stop him from becoming a violin genius.

The concert program includes compositions from Beethoven and Brahms.

Sept. 24: Keane, the English alternative rock band, is coming to Korea for its Strangeland: World Tour which started in May. Keane’s 2004 debut album, “Hopes and Fears”, won multiple awards and was the second-best selling British album of the year. Keane is known for using a piano as its main instrument.

Oct. 17: Bolton acquired worldwide fame with his cover version of “When a Man Loves a Woman” for which he won a Grammy.

Tracks such as “How Am I Supposed to Live Without You” and “Go the Distance” - the latter, which was featured in the Walt Disney motion picture “Hercules” - are also popular. The concert starts at 8 p.m.

Today: This production has been widely acclaimed by both critics and audiences, one of the main reasons why the ballet company has chosen to play it again. Jiri Kylian composed the piece for the 1991 Salzburg Festival on the 200th anniversary of Mozart’s death.

Aug. 28 and Sept. 1: Puccini’s classic has become part of the Italian opera repertoire and is the fourth most frequently performed opera in the world.

To Sept. 4: Based on the 1973 French play by Jean Poiret, the Tony Award-winning play “La Cage aux Folles” comes to Korea.

To Oct. 7: “Wicked” is a musical based on Gregory Maguire’s best-selling novel “Wicked: The Life and Times of the Wicked Witch of the West.” The Broadway production has been nominated for 11 Tony Awards, including Best Musical, Best Orchestrations, Best Costume Design and Best Scene Design.

To Oct. 21: The popular musical is back after its performance in 2005, and this time it will be shown at the Sangsang Art Hall. The story centers around rock singer Hedwig, who after a failed sex reassignment surgery goes on an American tour.

The cast includes Park Geon-hyeong and Oh Man-seok, who are well-known for their acting competency and very popular among female audiences.