‘The Office’ to close with 9th season

‘The Office’ to close with 9th season 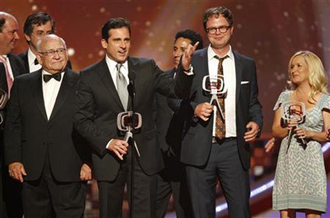 LOS ANGELES - The award-winning comedy “The Office” will end its run on U.S. television in 2013 after eight years, part of a “creative decision” caused by the departures of several key cast members, executive producer Greg Daniels said Tuesday.

Daniels told reporters in a conference call that the ninth season, starting Sept. 20, will bring back many familiar faces to NBC’s mockumentary workplace comedy.

“This year feels like the last chance to really go out together and make an artistic ending for the show that plays off a lot of the stuff that has mattered most to fans with the core characters,” Daniels said.

“This will be the last season of ‘The Office’ and we are planning a very big exciting last season. We are going to have a lot of familiar faces coming back,” he added.

The ending of the show follows the exit last year of lead actor Steve Carell, who portrayed bumbling office manager Michael Scott, as well as a decrease in audience size from a high of about eight million in 2008 to about four million earlier this year.

“The Office” has won four Emmy Awards and was adapted from the British series of the same name created by comedian Ricky Gervais.

Daniels, who developed the show for American TV, said the decision to end the series was made because of the success enjoyed by many of the cast members outside the program.

Rainn Wilson’s sycophantic Dwight Schrute is getting a spin-off series, Mindy Kaling has developed and stars in the upcoming comedy “The Mindy Project,” and screen couple John Krasinski (Jim Halpert) and Jenna Fischer (Pam) have both carved out movie careers on the back of their “Office” fame.

“It didn’t seem we could count on getting that many people back for a Season 10,” Daniels said.

“We debated whether to reboot it. It was a bit of a difficult decision. The format is a very strong format,” Daniels said, but the potential loss of key characters would mean “the show would be changed to such a degree it wouldn’t be the same show.”