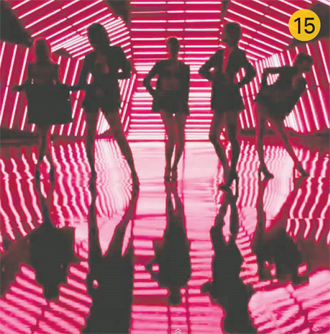 Girl group KARA’s 20-second music video teaser for the new song “Pandora” was distributed online Monday with a “15” rating on the top-right corner of the screen as required by the government’s new rule. Captured from YouTube


Girl group KARA’s music video teaser for the new song “Pandora” was released online on Monday. However, this 20-second teaser displayed something that it never did before: a “15” rating sign in the top right corner of the screen.

The Ministry of Culture, Sports and Tourism announced early this month that starting last Saturday, all music videos must be rated before being uploaded to YouTube or any other Web portal. The new measure is an attempt to protect minors from the “highly sexual or violent content” of music videos that oftentimes become hugely popular on the Internet after being banned from television, according to the ministry. A music video without a rating by the Korea Media Ratings Board could result in a maximum two-year prison sentence or 20 million won ($17,600) fine.

“It is a measure initiated by the National Assembly in order to regulate the unfiltered flow of music videos online that tend to contain more explicit or violent materials than TV programs and to protect minors from them,” the Culture Ministry said in a statement Aug. 7.

Under the new system, the producer or distributor of a music video must display the age-group rating for at least three seconds at the beginning of a video, according to the ministry. The new rule does not apply to private individuals.

However, instead of receiving the rating from the KMRB, the girl group’s agency, DSP Media, revealed yesterday the video had been rated by cable channel Mnet before being uploaded. Four days before the rule was to be implemented, the KMRB decided that ratings by broadcast stations could be used instead of a KMRB rating as long as the board is notified of the date of the screening and the name of the broadcasting station.

KARA’s agency told Starnews yesterday that it had received the rating from Mnet instead of from the KMRB because it was faster.

“The KMRB said it takes one to two weeks [for a video to be screened and rated], which can disrupt all the promotional events scheduled for KARA,” said a representative from DSP Media. “It’s common sense that an agency will go somewhere that can get the rating done faster.”

The mandatory rating requirement has sparked fierce criticism from the country’s music industry and K-pop fans across the globe.

Entertainment agencies that are increasingly using sites like YouTube to promote their artists said the KMRB rating process takes too long. Agencies typically start promoting K-pop artists’ new albums by unveiling music videos online. The KMRB said that receiving a rating will usually take seven to 10 days and cannot exceed 14 days by law. According to entertainment agencies, “every second counts” when it comes to music video productions and promotions that are directly linked to new albums.

They also have doubts about the Media Ratings Board’s ability to handle the more than 3,000 music videos that are produced in Korea each year. According to the ministry, there are “seven members representing all levels of society on the Video Classification Subcommittee of the KMRB, which will be conducting the evaluation and screening process.”

“Due to this new system, a lot of the artists are no longer able to plan their promotions in advance,” said Yang Hyun-suk, CEO of YG Entertainment, one of the top three entertainment agencies in the country, along with SM Entertainment and JYP Entertainment. “Time is a very sensitive issue in the K-pop industry. If something goes wrong in the prescreening process or takes longer than expected, it ruins all the following schedules.”

That is why Yang postponed release of G-Dragon’s music video online. The artist’s second solo album was scheduled to be out on the artist’s 24th birthday, Aug. 18, the same day the KMRB’s new measure took effect. The second solo album of G-Dragon, which is said to feature a collaboration with U.S. rapper Ludacris, comes three years after his first “Heartbreaker.” The fashion icon of the quintet idol group Big Bang took time off work for “self-restraint” after he tested positive for marijuana in June 2011.

Fans of G-Dragon have been posting endless comments under numerous online articles complaining about the government’s “ridiculous” decision.

“I’ve been waiting for so long, but now the stupid law is making me wait longer. Poor G-Dragon,” wrote a fan on one of the hundreds of online K-pop forums.

Girl group Sistar had to delete part of its 2010 music video “How Dare You” that included a pole dance after the video was banned by all three major broadcasting stations in the country as the dance moves were “suggestive.” [JoongAng Ilbo]


Another K-pop fan condemned the KMRB, saying it was the body that “slapped an adult-only rating on Lady Gaga’s ‘Born This Way Ball’ concert in Seoul.” “I knew ever since they banned me from going to Lady Gaga’s concert that they were going to do something even more stupid,” the fan wrote.

YG Entertainment’s Yang expressed strong disapproval of the government’s new ratings system, saying it is like “splashing cold water over a situation where K-pop is properly being spread to all corners of the world,” according to a phone interview with StarNews early this month.

“We planned all the promotions with G-Dragon’s birthday in mind. But, unfortunately, his birthday falls on the same day as the first enforcement date. Because of this new rule, a lot of our plans are getting tangled,” Yang said in the interview. “It’s difficult to understand why the government created such a policy that only daunts the artists and producers when its role is to help promote K-pop overseas.”

Musicians also opposed the new measure, insisting it will only hinder album releases and hamper the K-pop boom.

Korean rapper and TV entertainer Eun Ji-won criticized the new system on the day of the Culture Ministry’s announcement on Twitter as “music video censorship.”

“Music video censorship? Is it necessary? We must’ve given them too much authority. If so, I won’t make music videos any longer,” wrote the artist.

Yoon Jong-shin, a ballad singer and songwriter also opposed the new system and wrote on Twitter: “From now on, the release day of my ‘Monthly Yoon Jong-shin’ will be set to the day the ratings are done. Please tell me I don’t need to put an age mark on the video.”

The KMRB responded with a press release titled, “Mr. Yoon and Mr. Eun! Don’t worry about the Internet music video rating,” explaining that the rating system is not “censorship.”

K-pop fans are also up in arms and even filed online petitions opposing the new rating system. The creator of the petition on Daum’s Agora, one of the country’s largest online forums, appealed to other K-pop fans: “The concept of democracy is quite hard to find in Korea. There are indiscriminate attacks on the freedom of expression. The authorities have blindly labeled any cultural attempts as ‘harmful for kids’ and successfully dampened the morale of artists. Now they have even passed a revised bill titled ‘Music Video Rating System’ that would fit better in a communist state.”

The petition had garnered 10,084 signatures as of yesterday morning. The number of signatures exceeded 1,000 within five hours after the petition was posted Aug. 4. 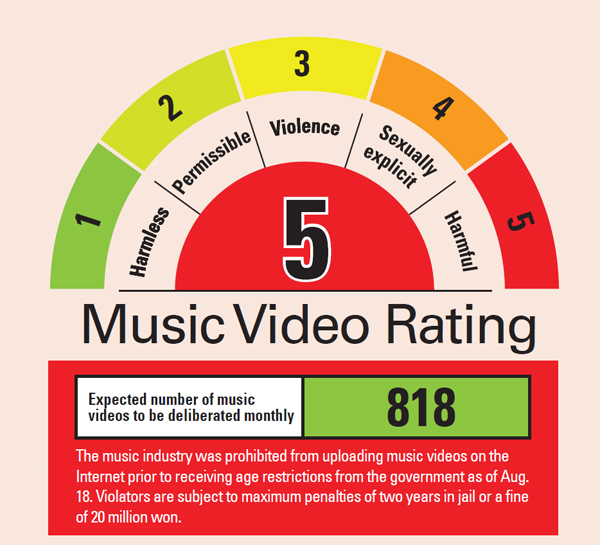 Addressing concerns that the new measure will eventually affect everyone, the KMRB explained that the regulation will not be applied to “non-business individuals.” That did not sit well with the country’s indie musicians.

A singer-songwriter Lee Yoon-hyuk raised questions on what constitutes a “non-business individual” on his personal blog Aug. 10.

Moreover, Lee also added that there’s no clear legal definition of “music video.” “If the government decides to extend the application of the law, it may include artists’ casual performances and video clips containing those performances, which poses a serious threat to indie musicians, as they tend to record live scenes of their performances as video clips.”

Meanwhile, boy band ZE:A and Tiny-G’s music videos were the first in line to request KMRB screening. Both received a PG rating and were released online on Tuesday.

Amid such fierce criticism, the Culture Ministry said it will grant a three-month provisional period when violators of the law will not be penalized.

“We have decided to adopt the provisional period for three months until Nov. 17 to minimize the confusion in the music industry and for the new measure to stably settle,” said Kim Hyun-joon of the Culture Ministry.