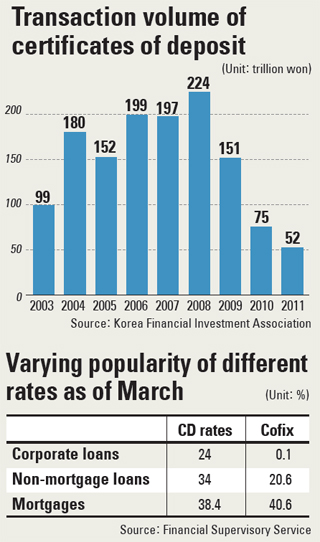 Financial regulators will replace contentious certificate of deposit (CD) rates with a short-term cost of funds index (Cofix) from the first week of November to serve as a new benchmark rate for bank lending, the Financial Services Commission said yesterday.

However, banks will still be required to keep issuing a certain quota of CD-linked loans to keep the monthly balance at 2 trillion won ($1.75 billion) in the name of stability, it added.

The announcement comes after the public lost trust in CD rates after the Fair Trade Commission (FTC) accused banks and securities firms of fixing the 91-day rates to reap profits. The scandal has been likened to the Libor scandal in Britain and the U.S., and local financial institutions have taken flak for what is seen as unrestrained greed in strained times when Joe Public is feeling the pinch.

According to the measure mapped out by a task force made up of figures from the FSC, the Ministry of Strategy and Finance, the Financial Supervisory Service and Bank of Korea, the Korea Federation of Banks will announce the Cofix rates every Wednesday, the financial regulators said. The new system will be put in place after two months of preparation, they added.

“To raise the transparency of the new short-term Cofix rates, a computerized system will be developed to calculate and announce rates [to avoid potential rate-rigging],” said an official on the task force.

“The existing Cofix rates are calculated manually. We expect the new rates will serve as an alternative for banks to use as a yardstick to formulate their short-term lending rates for companies and households, as these usually mature over a shorter period.

“Customers will benefit from the new measure because there is less chance of the Cofix rates fluctuating due to temporary external shocks.”

A big difference between the existing rates and the proposed short-term Cofix rates is that the former reflect a broad range of bank lending rates, while the latter will be restricted to loans with three-month maturities.

Unlike the current rates, which are revealed on the 15th of every month, the new rates will be issued weekly.