As Japanese bite back in U.S., Hyundai steps up game

As Japanese bite back in U.S., Hyundai steps up game

Hyundai Motor Group is marshaling its forces to respond to a renascent threat from Japanese automakers in the hotly contested U.S. market, as companies like Honda and Toyota rebuild their shares of global markets after being beset by economic and supply-side problems over the last year. 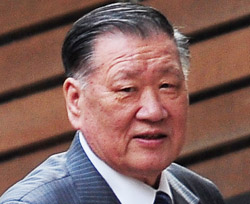 On Monday, Hyundai Chairman Chung Mong-koo jetted off to the U.S. on his private plane to inspect conditions in the world’s second-largest automobile market. This was the first time since June last year that the 74-year-old has made a trip to the country.

His trip was reportedly a last-minute affair, hastily put together last weekend. Chung will be joined by two vice presidents - Shin Jong-woon at the product quality management and Yang Woong-cheol who handles R&D - hinting at the perceived urgency and importance of the mission.

The world’s fifth-largest automotive group, which owns Hyundai Motor and its smaller affiliate Kia Motors, said Chung hopes to set up a strategy to put the brakes on the rise of Japan’s big three automakers - Toyota, Honda and Nissan - in the U.S. market. 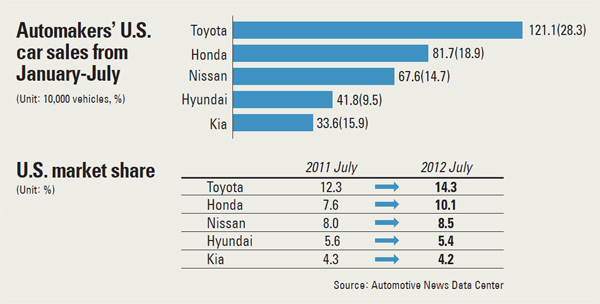 He is scheduled to return to Korea tomorrow after meeting with executives in Los Angeles, where Hyundai’s U.S. sales headquarters is located. He will also visit the company’s plants in Alabama and Georgia to check on product quality, and receive feedback from local dealerships. Hyundai and Kia have both posted healthy sales in the U.S. recently.

After Toyota had to wrestle with a large-scale recall in 2010, Korea’s top two automakers have been expanding their market share in the U.S. Last year, they posted a combined share of 8.9 percent and sold more than one million units.

But while they have seen sales shoot up by between 9.5 percent (Hyundai) and 15.9 percent (Kia) in the first seven months of 2012 compared to the same period last year, Japanese automakers are rapidly regaining traction in the U.S. on the back of aggressive marketing and discounted prices.

Toyota, which registered negative growth in the U.S. last year, sold more than 1.21 million vehicles to American customers in the first seven months of 2012, moving up 28.3 percent on-year.Honda, Japan’s third-largest automaker, was up 18.9 percent after selling 817,926 vehicles, and Nissan added 14.7 percent by shifting 676,062 cars.

In terms of combined sales, Hyundai Motor Group moved up by a smaller proportion of 12.3 percent, even though its sales - 755,471 vehicles - outstripped Nissan.

The contrast has become much more pronounced in recent months, with Hyundai adding just 4.8 percent in July compared to one year earlier, while Honda skyrocketed 45.3 percent, Toyota jumped 26.1 percent and Nissan climbed 16.2 percent.

The Japanese automakers are now planning to expand production to give sales an extra shot in the arm. Honda recently announced it will invest $40 million to increase annual production volume at its Indiana plant to 250,000 vehicles, while Nissan said it will hire 1,000 additional workers at its plant in Mississippi. Toyota is also reportedly considering expanding its North America production line.

Hyundai Motor Group said it is running its U.S. factories at full speed but that it needs more exports from Korea to tap demand. However, due to ongoing labor union strikes, it was unable to match last year’s shipments this July. It brought 11.1 percent fewer cars from Korea to the U.S. last month than one year earlier, while Kia was forced to cut its shipments by 6.5 percent. To make up for some of the losses, Hyundai said it will focus on product quality and business stability rather than undercutting prices. It said Chung told managers in the U.S. not to engage in tit-for-tat advertising campaigns and price wars with Japanese rivals based on the principle that customers get what they pay for.

“If we decided to revert to our former strategy of giving discounts and financial bonuses, our brand image would be jeopardized and we would be seen as a mass producer of cheap cars again,” said an employee speaking on the condition of anonymity.

In contrast, the carmaker has been raising its prices to generate more profits. The retail price of a new Azera (Grandeur HG in Korea), which was released in the U.S. in June, is between $32,000 and $36,000, more than 25 percent higher than the model’s previous edition. The new Elantra GT (known as the i30 in Europe and Korea) is 20 percent higher than its past incarnation. Hyundai is also handing out fewer sales rewards to local dealers compared to its rivals. According to Edmunds.com, an online automotive information provider, Hyundai’s average sales incentive to U.S. dealers from January to July was $964 per unit, while Kia paid $1,347, much below the industry average of $2,173.

Another tactic for the Korean group is shifting away from corporate sales, which generate less revenue as such deals are often large in scale and involve hefty discounts. These accounted for 26 percent of total sales in 2009, but it is trying to cut this to 6 percent, it said.

In the coming months, Hyundai is scheduled to release its Avante Coupe, a compact, and the new Santa Fe, an SUV, in the U.S. The group aims to 1.29 million vehicles in the U.S. this year, with Hyundai making up the lion’s share of 675,000 units, it said.