End in sight in Samsung vs. Apple suit in U.S.

End in sight in Samsung vs. Apple suit in U.S. 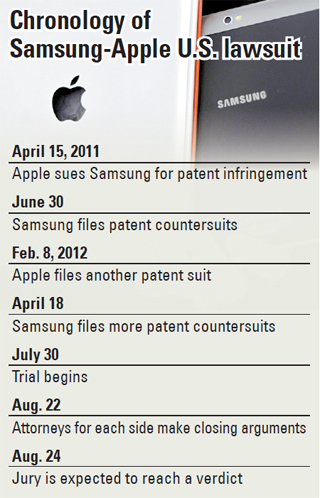 Concluding 50 hours of arguments and testimony over the past three weeks, the high-stakes patent battle between tech giants Samsung Electronics and Apple at a court in San Jose, California, wound down Wednesday with closing arguments from both sides.

Apple depicted Samsung as a copycat in its closing arguments, and Samsung fired back saying Apple just wants to knock out its biggest competitor, and if it wins the case, consumers will suffer.

The case has gone to a jury for a verdict, which could come as soon as Friday U.S. time.

“At the very top of Samsung’s corporate structure, those executives were determined to cash in on the iPhone’s success,” Apple lawyer Harold McElhinny told jurors Wednesday. “Samsung was able to copy Apple’s four-year investment, without taking any of the risks, because they were copying the world’s most successful product.”

“Apple is here asking you to prevent its largest competitor from giving consumers what they want - smartphones with big screens. .?.?. Why is Apple doing this? Rather than compete in the marketplace, Apple is seeking a competitive edge through the courtroom. It’s seeking to block its biggest and most serious competitor from even attending the game.”

He continued: “Every single smartphone has a rectangular shape, rounded corners, and 90 percent of the real estate on the front of that phone is the screen,” said Verhoeven. “Is that because people are copying each other? No. It’s because the technology advanced, and form is following function.”

The Cupertino, California-based company sued the electronics arm of Korea’s biggest conglomerate in April 2011 for designing smartphones and tablet PCs that copied the iPhone and iPad. Samsung countersued by arguing Apple infringed its patents on wireless communication and utilities. Apple is seeking damages of up to $2.75 billion and Samsung is demanding up to $422 million.

Just before the closing arguments, U.S. District Judge Lucy Koh read to jurors 109 pages of instructions that outlined the legal grounds behind the myriad laws and regulations that are a part of the case. It took more than two hours with mandated breaks.

The Korean-American judge had repeatedly asked the two companies to settle outside of court, saying their top executives should try to reach an agreement. On Tuesday, Apple CEO Tim Cook and Samsung Vice Chairman Choi Gee-sung talked on the phone but were unable to reach an agreement, according to Samsung lawyer Kevin Johnson.

Jurors are expected to start deliberation from 9 a.m. on Wednesday local time and make a ruling on Friday at the earliest. The jury is also responsible for determining damages. The verdict could take longer, however. There is no deadline, and rules for federal courts require a unanimous verdict for a win or lose, which the jurors may try to reach with further discussion. The jurors base their conclusion on a range of individual issues and therefore are expected to have a verdict and not call a mistrial.

But Judge Koh earlier expressed concerns about the highly technical aspects of the material in the trial. “I am worried we might have a seriously confused jury here,” Koh told legal counsel from both companies. “It’s so complex, and there are so many pieces here.”

Whichever side wins, the loser will “definitely file an appeal suit,” said a Samsung spokesman. The case is the first to go before a federal jury in an intellectual property war being waged by the two companies on four continents for dominance of a smartphone market valued at an estimated $219.1 billion.