NCsoft not alone in seeing salvation in Europe

NCsoft not alone in seeing salvation in Europe 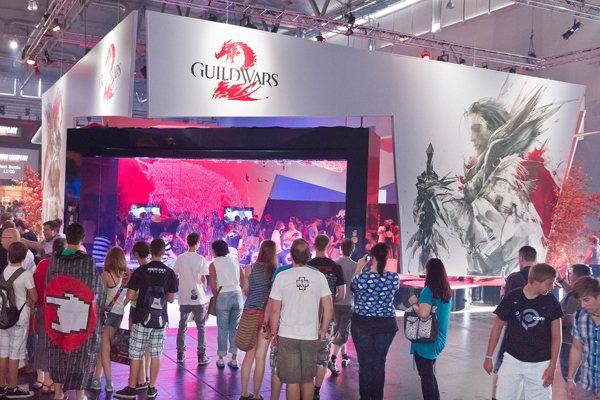 Visitors check out NCsoft’s booth at Gamescom 2012 to see previews of its new online game Guild Wars 2.Provided by Gamescom


COLOGNE, Germany - Some 277 contracts worth $73 million were signed by Korean game companies and European buyers at Gamescom 2012, which wrapped up in this culturally vibrant German city on Sunday, the Korea Creative Content Agency (Kocca) announced yesterday.

It was Korea’s best performance yet in terms of business deals at a major international game show and marked an improvement of 55 percent from last year, when deals worth $47 million were inked at Europe’s premier trade show for games and entertainment, the state-run agency said.

Korean games developers have been making stronger efforts to branch out overseas in recent years, with Europe a new target due to an improved Internet infrastructure that better facilitates online and mobile games.

The massively multiplayer online role-playing game (MMORPG) continues the company’s transition from a subscription model to a free-to-play system based on micro-transactions, as it experiments with a challenging new business model.

Although the company has dominated its home market with such hits as Lineage, Aion and Guild Wars, it has seen revenue wane over the last few years and considers its success on foreign shores vital to its future survival.

In the second quarter, the company reported an operating loss of 7.6 billion won ($6.69 million), almost half of the 13.7 billion won it posted in Q1 and its first quarterly loss in six years. Its revenue fell 12 percent in the latest quarter on-year.

The shrinking profits caused it to cut around 10 percent of its work force, about 400 staff, in its first large-scale layoffs.

Nexon, the nation’s No. 1 game developer and distributor, bucked the trend by posting a 12 percent expansion on the back of thriving overseas sales.

“The game industry is usually immune to a stagnant economy,” said Kim Seong-gon, secretary general of the Korea Association of Game Industry. “However, [Korean] gamers have been thinning out while the domestic industry is also suffering from an onslaught of foreign hits like Diablo III [by U.S.’ Blizzard Entertainment] and League of Legends [produced by Riot Games, another U.S. outfit].”

In a bid to turn the situation around, NCsoft founder and CEO Kim Taek-jin recently reached out to Nexon by selling his stake in the company, a move that saw the former rival emerge as NCsoft’s majority shareholder. Kim said he hopes to utilize Nexon’s burgeoning overseas network.

“We plan to target overseas markets by drawing on Nexon’s knowhow, as it has accumulated rich experience in launching titles in foreign markets, including in China,” he said last month.

NCsoft’s overseas revenue accounts for 40 percent of the total, with half of that sum coming from sales in Japan. Nexon, on the other hand, has strong distribution power abroad as it runs headquarters in both Japan and Europe. As many of its games target a younger audience, however, it loses a key demographic audience that more serious titles would win over. 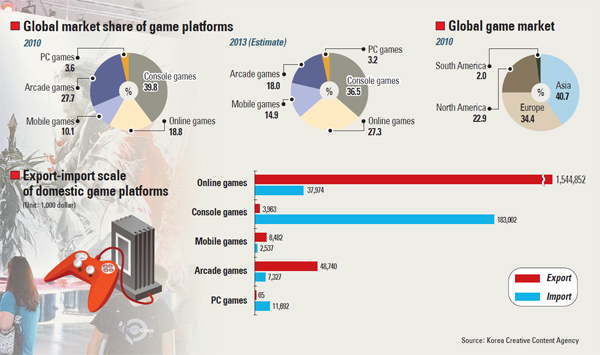 Market observers said more Korean companies are looking overseas as they feel squeezed by the government’s moves to curb game addiction among adolescents. A so-called “Cinderella law,” enacted in November, blocks those under the age of 16 from accessing gaming Web sites from midnight to 6 a.m. in a bid to limit the time kids spend hunched over smoky desks in crowded Internet cafes.

The damp market sentiment was seen on July 17 when the G-Star gaming festival reported that applications from game developers had fallen 10 percent on-year. Although the final deadline is not until the end of this month, some major players including CJ Netmarble are reportedly considering not even turning up for the four-day event that kicks off on Nov. 8.

Industry insiders said the government’s regulation has painted the industry in a negative light.

“The regulations have really put the brakes on the domestic game industry,” said the owner of a small local company that develops games. “They have discouraged investors and created a vicious cycle for developers and gamers. Companies stretched for cash will focus on simpler games that require lower budgets and a quicker development time. They will move away from complex MMORPGs that require lots of time and money, depriving gamers of the chance to enjoy high-quality titles.”

Hong of Kocca said the government needs to refrain from hammering out too many regulations so as not to suffocate the industry.

“The online game industry has been a driving force of cultural content for Korea and a major export item,” Hong said. “It makes up 54 percent of the all exports of cultural content, so society needs to recognize the industrial value of gaming.”

Consoles continue to dominate the global market, but online and mobile games are growing at an explosive rate. Games for consoles, including Nintendo’s Wii, Sony’s PlayStation 3 and Microsoft’s Xbox 360, owned 39.8 percent of the global market in 2010, followed by arcade games (27.7 percent), online games (18.8 percent), mobile games (10.1 percent) and PC games (3.6 percent), according to Kocca.

Korea’s online games have a 25.9 percent share of the world market, but they still trail China (30.4 percent).

Kocca also estimates that the combined market share of online and mobile games will surpass that of console games in 2013 as Internet connections improve and smartphones become more widespread.

It forecast that, next year, games for consoles will hold a 36.5 percent market share, while online games will leapfrog arcade games by 9.3 percentage points to control 27.3 percent. It sees mobile games growing to 14.9 percent in the same period.

Europe was the world’s second-largest game market as of 2010 with a 34.4 percent share, trailing Asia’s 40.7 percent, according to figures supplied by Kocca.

Nexon Europe CEO Kim Sung-jin said he is confident the company will maintain double-digit growth in Europe over the next five years despite the fiscal crisis tearing holes in industries throughout the region.

“We will continue paving the way for the European expansion of Korean online games,” he said.

When Nexon established its European base in London in March 2007, it reaped just 300 million won in profit. In November 2010, the office moved to Luxembourg to capitalize on its geographically central location and high-end information and communication technology (ICT) infrastructure, including data centers.

In that year, sales had gone through the roof, earning the company some 13.6 billion won. One year later, this figure had more than doubled to 28.7 billion won on the back of 10 million subscribers.

According to Nexon Europe, over 394 million Europeans had access to the Internet in 27 EU countries as of April, making up 73.2 percent of the region’s population.

“When non-EU member countries are factored in, the population rises to 800 million,” said Kim of Nexon Europe. “So that makes it a very attractive market for us.”

“A lot of people underestimate the online game market in Europe because of the fiscal crisis in the euro zone,” said Hong of Kocca.

“But there is incredible growth potential and that’s why Korean firms are rushing to tap the market.”