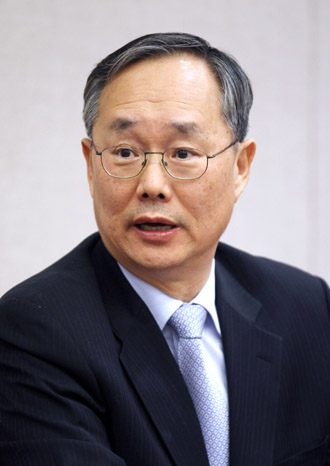 “Growth in bilateral relations and inter-personal exchanges could prevent issues that can later develop into deeper conflict between the two countries,” Lee said in a written interview with the Korea JoongAng Daily, several days before South Korea celebrates its 20 years of diplomatic ties with China on Friday.

“The two should maintain close communications and cooperation so that [conflicting] issues do not impede building up of ties.”

The 61-year-old veteran diplomat has carried out his role as Korea’s ambassador to China since last year.

He passed the foreign service exam in 1974 and served in various key posts at the Ministry of Foreign Affairs and Trade, including second vice minister from September 2005 to November 2006.

His last post was ambassador to Russia, which he served from March 2007 to January 2010.

“Most importantly, the two countries should be willing to improve relations with a positive attitude even though sensitive issues are involved,” Lee said.

Recent allegations made by human rights activist Kim Young-hwan that he was tortured by Chinese security officials have strained the two countries’ ties. Kim and three other Korean activists were arrested in March in China on charges of “endangering the country’s national security.” The four were released in July.

The Korean government has requested its Chinese counterpart launch a reinvestigation into the allegations; however, China has consistently denied the allegations, saying that it has treated Kim in a “civilized and humanitarian manner based on relevant legal processes while respecting his legitimate rights.”

Q. You met with Chinese Assistant Foreign Minister Zhang Ming earlier this month upon Seoul’s request for a meeting with Beijing to discuss Kim’s case. There seems to be no progress, however, in China’s attitude in dealing with the issue. How should the two countries approach this issue now?

A.It seems only natural to me that the closer the two countries become and the more personal contact there is, the more they find out there are differences when approaching sensitive issues [like this]. Despite the differences, however, the two should maintain intimate relations and cooperate with each other so that such sensitive issues and incidents don’t prevent the relationship from moving forward. Both countries should approach problems with a positive mindset.

Do you foresee a break in bilateral ties because of the Kim Young-hwan case?

There are voices of concern over how the two governments are handling Kim’s case and there are also worries that bilateral relations will worsen because of this.

But I would say that it would be only right for the governments to do what they ought to do to foster the bilateral strategic and cooperative partnership. Based on the procedure, the Korean government has actively requested China conduct a thorough reinvestigation of Kim’s allegations and will continue our efforts by monitoring any changes in the situation.

Korea and China celebrates 20 years of diplomatic ties this Friday. What are some of the main achievements made by both countries?

The relationship has developed into a strategic and cooperative partnership and trade ties in particular have grown immensely over the past 20 years.

As of last year, the bilateral trade volume has jumped 35-fold from when the two countries signed their diplomatic ties in 1992.

It jumped from 6.4 billion won ($5.6 million) to 245.6 billion won. In line with this development, official Korea-China free trade agreement talks were launched in May and I expect the start of this negotiation will bring the bilateral relationship to a new level.