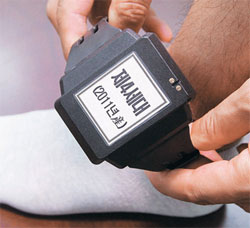 Prosecutors said they have requested that courts place electronic anklet tracking devices on more than 2,000 ex-convicts who committed a sex crime before the anklet-tracking system was introduced.

However, the supervision plan is currently waiting for a ruling from the Constitutional Court on its constitutionality.

As the court deliberates, more repeat sex offenses are being committed by ex-convicts, leading to calls for the court to make a quicker decision. The Ministry of Justice said a total of 6,916 ex-convicts meet the criteria to wear the tracking device within the retroactive supervision plan in the country.

Sex offenders who were arrested and jailed prior to the anklet plan, which was developed in September of 2008, cannot be tagged even if they are released in 2008 or after.

The case came up when prosecutors requested the device be placed on the 60-year-old suspect, surnamed Kim, who was jailed for four years for molesting an eight-year-old girl.

“Applying the retroactive supervision plan is up to a [district] court,” a Supreme Court spokesman told the JoongAng Ilbo. “But they [courts] tend to wait until the Constitutional Court makes a decision because ex-convicts who already are wearing the tracking device may apply for a re-trial in accordance with the court’s decision.”

Courts approved prosecutors’ requests to put the tracking device on 424 ex-convicts and rejected 231 among the 2,675 cases.

Kang Nam-jin, 38, who was arrested for killing a 65-year-old man surnamed Ko, trying to rape a bar owner and wounding four others on Tuesday while intoxicated, is one of the 2,019 ex-convicts waiting for the constitutional court’s decision.

The prosecution said that 19 of the 2,019 have committed a sex crime while the courts wait to make a decision.

The Suwon Jungbu Police Precinct arrested Kang for murder. The police found out that the suspect has been convicted 11 times and he was released in July after being jailed for seven years for raping a woman in 2005. Kang, however, was not wearing an electronic tracking device on his ankle when he was caught by the police.

On Feb. 16, the Gunsan Branch of Jeonju District Prosecutors’ Office in North Jeolla requested a court in Gunsan to put the tracking device on Kang as he was scheduled to be released in July. The prosecution said it was necessary for Kang because he has been convicted twice for rape.

The court, however, reserved its judgment and waited for the constitutional court. But the decision has been delayed as judges remain divided. Some supporting the revised law say “it is necessary to use the tracking device because it could prevent more crimes,” but judges who are against the revised law say “the retroactive supervision plan violates the principle of non-retroactivity.”