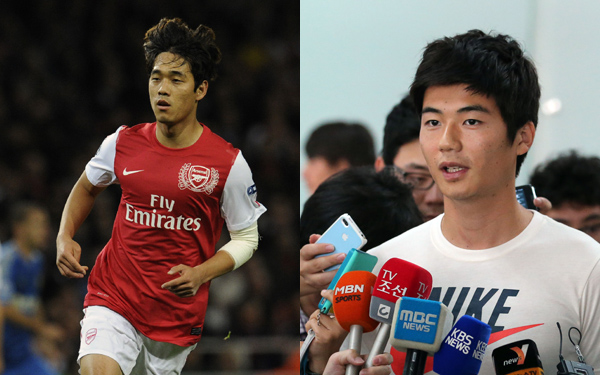 “Fulham is contacting Park Chu-young’s agent secretly and the two sides narrowed the differences significantly as the talks proceeded,” the source with knowledge of the negotiations said. “I expect positive news to come out soon.”

The amount offered by Fulham for his transfer from Arsenal was around ￡3 million ($4.8 million), less than the ￡4 million price tag Arsenal has put on the Korean striker, the source said.

“Even if the talks for his transfer do not go well, Fulham still wants to use him on loan,” the source said.

On the verge of an unwanted leave from Arsenal after essentially spending the 2011-12 season on the bench, a transfer to another EPL club would be welcomed by Park.

The west London side may offer the opportunity to get substantial playing time against some of the world’s top clubs.

Clint Dempsey, the 29-year-old forward of the United States who scored 23 goals for the London side last season, has pressured Fulham to transfer him to Liverpool, holding out from the team for over a month, including the season opener against Norwich last Saturday.

Midfielder Mousa Dembele of Belgium is also rumored to be moving to another English Premier League club.

The summer transfer window will close on Sept. 1. Park left for London on Wednesday, a day after he was summoned by Arsenal.

According to the source, the Gunners suggested to Fulham that if the two sides reach a deal, they would announce it right before the closure of the transfer window. Fulham is already setting up a plan to utilize Park’s marketing potential and has secured a Korean-English interpreter for him, the source added.

Some local media outlets have reported on a possible move to Spain’s Celta Vigo, but another source familiar with the transfer market in European football told Ilgan Sports that Park is skeptical of the move.

Meanwhile, Ki Sung-yueng of Celtic left for London yesterday for a physical check-up at Swansea City as the deal to make him the 10th Korean to play in the English Premier League comes to a close.

Swansea City Chairman Huw Jenkins told Scottish STV a few hours earlier that Ki agreed in principle to play for the Wales-based club, two days after he revealed an agreement between the two clubs on his transfer fee. Both are yet to disclose the fee, but it is reported to be ￡5 million to ￡6 million.

Before the departure, the 23-year-old Korean midfielder told reporters at Incheon International Airport that one or two days are needed to finalize his decision to move to Swansea.

Still, his heart appears to be set on the club.

“I am honored about the chance to play in England, a world-class football stage,” Ki said.

“I think it would become a good opportunity for me if I were able to fully display my talents there.”

Ki, who helped his Scottish club win the domestic league title last season, has been subject to widespread rumors of his transfer for months including one linking him to the Queens Park Rangers, which recently brought another Korean football star, Park Ji-sung, from Manchester United.

But his value increased after the London Olympics, where he impressed and helped lead the Hong Myung-bo squad to Korea’s first-ever Olympic medal in football.

He has also received legal exemption from the compulsory 21-month military service through the bronze medal.

Ki said he has received offers from more teams after the Olympics than before and that his decision to wait paid off. Arsenal, Liverpool, Fulham and Spanish side Atletico Madrid were rumored to have contacted him.

His father Ki Young-ok told local media outlets yesterday that there remains a possibility, although a very small one, that his son could move to Fulham instead of Swansea City.

The player said he prioritized how much a club needs him over how much he needs the club in his search for a new team.

“If I can’t stand on the pitch, there is no use in moving to a big club or big league,” he said.