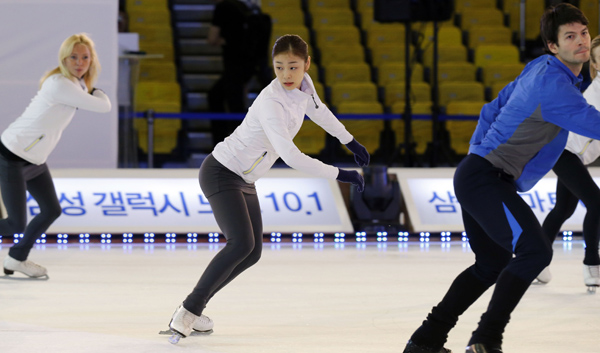 Korean figure skater Kim Yu-na trains yesterday at the ice rink within Olympic Gymnastics Hall in southeastern Seoul a day before her new gala show kicks off in the same venue. [YONHAP]


A month after announcing her return to competitive figure skating, Korean star Kim Yu-na said yesterday that she is slowly but steadily getting back into competition mode.

“I still need time and effort to be able to physically ready myself for a competition,” Kim said at a press conference in Seoul. “There is a risk of injury if you try to perform at a high level all at once, so I am taking time slowly to polish my skills.”

The 21-year-old gold medalist at the 2010 Vancouver Olympics said early last month that she would compete in the 2014 Sochi Winter Games, dismissing rumors that she was moving toward retirement from professional figure following a one-year leave.

She sat out of the 2011-12 Grand Prix Series after finishing second at the World Figure Skating Championships in Moscow in April 2011.

On Monday, her agency All That Sports announced her new path to collecting the points needed to qualify for the Sochi Olympics. Her new short program is to “The Kiss of the Vampire,” the main soundtrack number of the 1963 British movie of the same title, and her new free skating program is to a compilation of songs from “Les Miserables,” a musical adaptation of the French novel.

David Wilson, Kim’s choreographer, said during yesterday’s press conference that a dangerous and a provocative character like the vampire would suit the figure skater.

Kim said she too likes the new songs.

“In the past, I did a character-focused short program like tango and the Bond girl and had searched for a fresh character that could outdo them, finally choosing ‘The Kiss of the Vampire,’?” she said.

She said she plans to compete in a “small international competition” in December but has yet to release the details of her competition schedule. She also said no decision has been made regarding her new coaching staff.

In August 2010, Kim parted ways with her first foreign coach, Brian Orser, with whom she won the gold medal at the Vancouver Games. Two months later, Peter Oppegard, an American retired pair skater, was hired as her new coach and mentored her until the 2011 World Championships.

The press conference was held ahead of her new gala ice show beginning today. Under the theme of “To The Ice World,” the gala show will be held in the Ice Rink within the Olympic Gymnastics Hall in southeastern Seoul through Sunday.

During the event, Kim will dance to “El Tango de Roxanne,” the first time she will perform to the song in a gala show. She performed to the music in the World Championships in her debut year in a senior competition in 2009 in which she set a new world record.

She will also dance to “All of Me” by Michael Buble, a routine she introduced in the previous gala show earlier this year.

Tatiana Totmianina and Maxim Marinin of Russia, the pair who were gold medalists at the 2006 Turin Winter Olympics, will also perform at the show and dance to “Exchange of Relative” and “Masks,” both songs by Russian composer Igor Krutoy.

Alexei Yagudin of Russia, the 2002 Olympic champion, will also perform to “Liber Tango” by Astor Piazzolla and “Burn My Shadow” by Uncle.

Patrick Chan of Canada, the 2011 World Champion; Brian Joubert of France, the 2007 World champion; and Laura Lepisto of Finland, the 2010 World bronze medalist, will also perform.