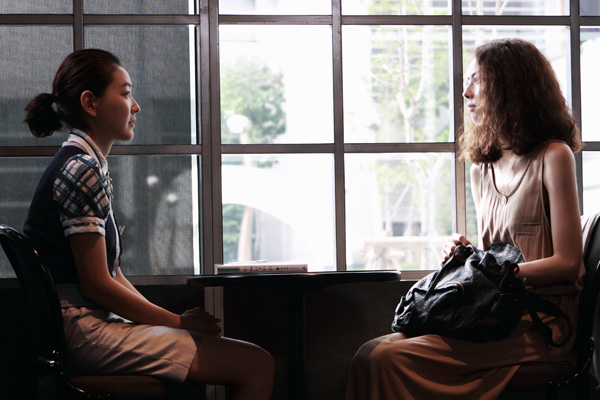 “Grape Candy” explores a mysterious friendship between two women who share an aching memory during their high school days. Provided by Mountain Pictures


When one thinks of a coming-of-age movie dealing with old friendships from high school, the first things that often come to mind are nostalgic, joyful memories with a close-knit group of friends, or perhaps a heart-moving reunion.

But in Kim Hee-jung’s “Grape Candy,” a hint of mystery is added to the flavor, differentiating the upcoming film from typical growing-up flicks. The mystery manages to maintain tension throughout, while a careful depiction of a teenage relationship ensures those looking for an emotional ride are not disappointed.

Sun-joo leads a mundane life as a bank clerk and bride-to-be until she re-encounters her high school friend So-ra, who happens to work with Sun-joo’s fiance, Ji-hoon. Their reunion is not joyous, by any means. So-ra forces Sun-joo to reveal what exactly happened on the day their mutual friend Yeo-eun died.

Viewers may feel as though they are putting pieces of a jigsaw puzzle together as the interwoven story unfolds. The scenes flash back and forth between the past and the present, although some scenes fail to transition smoothly.

So-ra’s character, played by singer and actor Park Ji-yoon, further adds an enigmatic air to the movie. With “Grape Candy” being Park’s first major film, her acting fits the tone of the movie, along with the setting - gray, smoggy streets and docks of the port city of Busan.

But that doesn’t mean to imply that her acting was flawless; she delivers wooden performances in some high-emotion scenes.

The best part of “Grape Candy” is the sensitive portrayal of the psyche of teenage girls, as well reflected in the director’s debut feature “The Wonder Years” in 2007.

The lead character, Sun-joo, was Yeo-eun’s only close friend before So-ra transfers high schools. The three girls from a triangular friendship but Sun-joo feels So-ra takes away Yeo-eun from her.

The protagonist’s isolation is well depicted in a scene in which Sun-joo finds that Yeo-eun no longer stands by her when she ties a shoelace. Yeo-eun leaves her behind, holding So-ra’s hand. Sun-joo also feels excluded when the two only share the context of a story.

Despite the jealousy and interwoven emotions of the teens, a grape candy in the movie still symbolizes the pure nature of adolescence. The three friends often share candy together when hanging around.

Candy was used to break the ice early in their relationship. But for grown-up Sun-joo, it evokes a painful feeling, constantly taking her back to the day Yeo-eun died.

While the upcoming film will most likely appeal to women in their 20s and 30s, the story is still relevant to all of us who have our own grape candy inside.

“Grape Candy” is scheduled to hit theaters on Sept. 6.