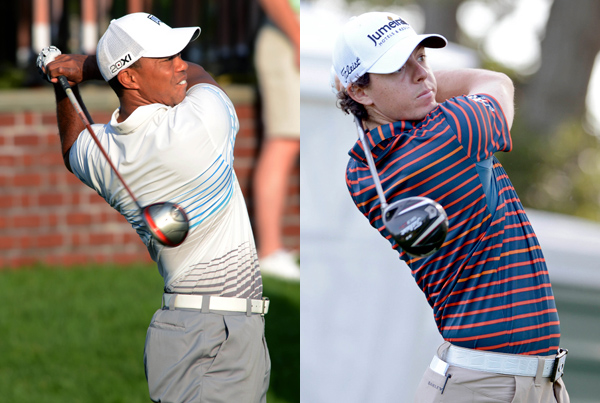 Tiger Woods, left, and Rory McIlroy tee off on the first hole of The Barclays golf tournament Pro-Am on Wednesday. [AP/YONHAP]


With his weekend slump at the PGA Championship swiftly forgotten, Tiger Woods is excited about renewing his burgeoning rivalry with Rory McIlroy at this week’s Barclays tournament in Farmingdale, New York.

Former world number one Woods and the man long regarded as his heir apparent, Northern Irishman McIlroy, have been grouped together for the opening two rounds on the challenging Bethpage Black course at Bethpage State Park.

“It’s going to be fun for both of us,” Woods told reporters on Wednesday while preparing for the first of the PGA Tour’s four lucrative FedExCup playoff events. “I enjoy playing with Rory, and I hope he feels the same way.

“I got a chance this year to play with him at Abu Dhabi in a practice round, and we really hit it off. He’s a great kid.

“I just hope that everyone just lets him grow and develop as a player because it’s going to be fun to see over the next 20 years how this kid’s career is going to pan out.”

Woods, 36, has won 14 career major titles while McIlroy, at 23, clinched his second grand slam crown with a runaway eight-shot victory in this month’s PGA Championship at Kiawah Island.

Already, there is a wide flow of mutual respect between the two players.

“Tiger has been the best player in the world for the last 15 years, so just that people are mentioning my name with the likes of him is a huge compliment,” said world number one McIlroy.

“Every time I’ve played with Tiger, he’s sort of brought the best out of me. I really feel focused and obviously want to play well.

“I’m looking forward to it,” he said of the opening round at Bethpage. “I really enjoy his company. I know we’ll have a good time out there.”

Asked what impressed him most about McIlroy as a player, Woods replied: “Rory has won a few tournaments around the world, not just here in the United States .?.?. which is important.

“It’s important to win on different continents against different fields on different grasses in different environments .?.?. that’s going to serve him well going down the road.”

Woods also spoke about his yearning desire to follow in the footsteps of the golfing great Jack Nicklaus, who won the last of his record 18 major titles at the age of 46, with his own longevity at the pinnacle of the game.

“That’s the neat thing about what Jack had done,” Woods said. “Jack competed against Arnold [Palmer] and Gary [Player] and [Billy] Casper and then moved on to [Tom] Watson and [Lee] Trevino and [Tom] Weiskopf and [Johnny] Miller.

“And right now this is my 17th year on tour so I’ve been doing it a while. Hopefully I can continue doing it.”

Woods, the only triple winner on the 2012 PGA Tour, heads into this week’s event at the top of the FedExCup standings and says he has no lingering after-effects following his disappointing finish to the PGA Championship.