Gas prices creeping back to 2,000 won

Gas prices creeping back to 2,000 won 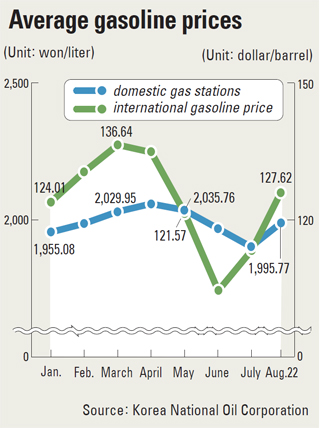 As international crude oil prices continue to spike, the average price of gasoline at petrol stations across the nation reached 1998.36 won ($1.77) per liter yesterday, marking the 38th daily climb since they tanked in the middle of last month.

The rebound comes as Dubai crude, which makes up the bulk of Korea’s imports and ranks as one of three major international oil prices, shot back up to $110 per barrel last month, tracking a similar rise posted in February.

Now the government is taking flak for its hasty measures to curb oil prices, which are largely seen as ineffective, as the figure creeps back up to 2,000 won per liter.

In April, the government responded to the record gas and diesel prices by announcing that it will allow sales of cheaper mixed oil products, or blends of multiple brands and grades.

Moreover, the government expanded the number of altteul, or thrifty, gas stations that provide cheaper gas based on bulk sales.

However, consumers have complained about the paucity of altteul stations in urban hubs, as only eight have opened in Busan and seven in Seoul.

“Samsung Total Petrochemicals, once the nation’s fifth-largest supplier of petroleum, is running low on supply and its impact on lowering the oil price is negligible as it cannot meet demand,” said an industry source.

The government adopted a policy to eliminate the 3 percent tariff on all imported oil products in April, thereby reducing the price of a liter of imported oil by 50 won for local refiners.

But while this translated into savings for Japanese exporters, the discounts were never passed on to Korean consumers.

Another annoyance for motorists is that the government still has not followed through with its promise to authorize sales of mixed oil products.