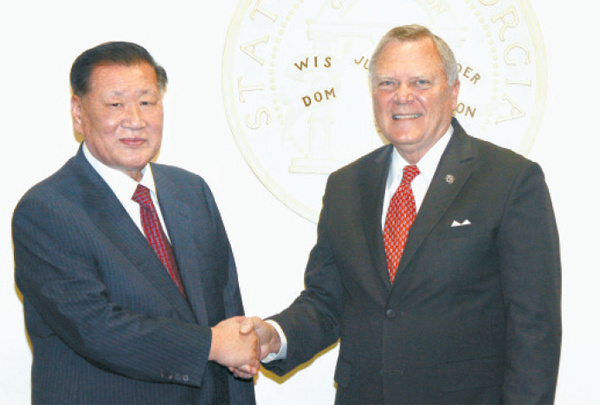 Hyundai Motor Group Chairman Chung Mong-koo, left, poses for a photo with Georgia Governor Nathan Deal after a meeting at the governor’s office on Wednesday. [YONHAP]

During his visit to the company’s plant in Georgia, U.S., yesterday, Chung said that Hyundai Motor and its smaller affiliate Kia Motors should pay attention to product quality before it worried about increasing supply.

“To solve the insufficient supply here due to rising demand for our models, it is important for the local plant to provide the right amount of supply,” the chairman said.

“But we need to satisfy our customers first with thorough product quality management,” he said, “and then minimize customer discomfort by stabilizing our product supply.”

The world’s fifth-largest automaker has been cruising in the U.S. market, but recent aggressiveness by Japan’s three major automakers - Toyota, Nissan and Honda - has given a headache to the Korean automaker.

While Japanese automakers have been aggressive with discounts and sales promotions, Chung decided not to engage in “price wars” but to fight back with quality.

The 74-year-old chairman said that Kia plant in Georgia is on the right track to increase its production capacity.

The Georgia plant has been a big contributor to the company’s sales in the U.S.

From June of 2011, the factory added a third work shift, allowing increased production.

Chung said that the group will also adopt a third shift in its plant in Alabama starting next month.

It started to manufacture the K5, a midsize vehicle, from last September and will also make the new Santa Fe, a sport utility vehicle.

Meanwhile, Chung met U.S. politicians during his visit to the U.S. to thank them for local government support.

“With the support of Georgia’s government, our company was able to do steady business here,” Chung said. “We ask for active support and cooperation in the future as well.”