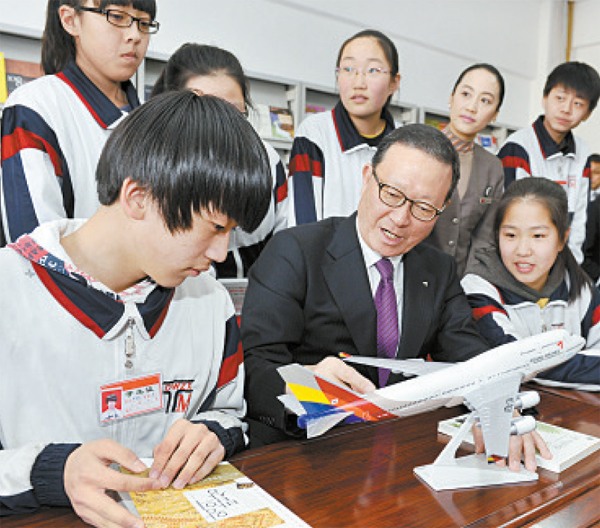 
Asiana Airlines, which has been one of the major carriers for routes between Korea and China, is stepping up its competitiveness through offering more flights and new aircraft on the rising demand for flights to Korea’s neighbor to the east.

Asiana Airlines began its Beijing and Shanghai routes starting in 1994 and within 20 years since its advance to China, it has become the carrier with the highest number of routes to the world’s second largest economic power, flying 30 routes in 21 cities.

Starting last year, China has taken great interest in the advanced IT technology in Korea, prompting a theme-package-tour product dubbed Korea High-Tech IT with Asiana, which caused a sensation among Chinese tourists. The IT tour product introduced by Asiana features a course to visit the high-tech IT facilities in Korea, including the Samsung D’light in Seocho-dong, southern Seoul, Digital Pavilion in Sangam-dong, western Seoul, and Yongsan Electronics Market, central Seoul, as well as a look around popular tourist destinations in the capital as well as the demilitarized zone and southernmost island of Jeju, drawing a positive feedback that it is a comprehensive package with work and tourism in one. The product became available starting June 27, 2011 in China and by the second half of last year a total of 16,000 Chinese tourists visited Korea through the package. Asiana plans to continue this trend by boosting its marketing and expects the package-tour tourists to reach 40,000 this year.

As acquiring tourist visa for Chinese citizens has become simplified, Asiana introduced a Chinese-only flight China Exclusive, connecting Incheon and Jeju since October 2010. This greatly improved the convenience of Chinese tourists, putting Asiana at the forefront of Korean tourism industry for Chinese nationals.

Meanwhile, Asiana has been working to improve its brand image within China by engaging in philanthropic works giving hope and dream to the children in China. Some of the charity works involve a joint project with Korea International Cooperation Agency to provide school supplies to schools in less developed areas in the mainland, including Tumen No. 5 Middle School in Jilin Yanbian Korean Autonomous Prefecture and Wafangdian Laohutun Town Central Primary School in Dalian in Liaoning Province. The crew members visit the schools with the supplies and stationery items and also hosts lectures teaching students about jobs in the airline industry. For the next three years, the company plans to expand the One Branch One School philanthropy project to 20 Asiana branches in China.