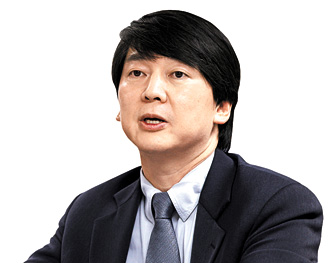 A group of liberal civic activists, philosophers and religious leaders yesterday urged Ahn Cheol-soo, a software mogul-turned-scholar, to be prepared for public scrutiny if he runs for president.

The Hope 2013, Victory 2012 Roundtable, formed by the elder statesmen, yesterday held a meeting and a press conference at the National Assembly to issue their position on Ahn and the liberal alliance ahead of the December presidential election.

The 50-year-old liberal independent has yet to declare his bid, but opinion polls have shown that he is the strongest contender against the conservative ruling Saenuri Party’s Park Geun-hye.

“We have no intention to pressure Ahn to make his bid public more quickly,” the roundtable members said in the statement. “But the time has passed for him to turn back and we want to stress that he is responsible for contributing to the joint victory of the liberal forces, even if he won’t become the consolidated opposition candidate, by making the best use of the dynamics of the Ahn Cheol-soo phenomenon.”

The roundtable also said Ahn must give shape to his ideas even before announcing his presidential bid.

“He also needs to accept the liberals’ scrutiny and feedback,” the group said. “And he must hurry to prepare for cooperation with other liberal, reform forces.”

The roundtable’s statement came days after Park won an overwhelming victory in the Saenuri Party’s primary.

After becoming the formal presidential candidate of the conservative ruling party, Park has made surprise moves under her campaign theme of “national unity” by visiting the grave of the former President Roh Moo-hyun and meeting with the widows of Roh and former President Kim Dae-jung.

Her approval rating also went up recently, recording 49.5 percent on Wednesday according to the Realmeter poll, while Ahn came in at 45.4 percent.

Perhaps a representation of the growing frustration of the liberals, the roundtable talked about other major political parties.

“It is deplorable to see the current situation of the Unified Progressive Party,” the roundtable said. “The time has come to seriously think about which parties should form alliances and invite outside forces to realize the people’s desire for liberal politics.”

In the April legislative elections, the main opposition Democratic United Party formed an alliance with the UPP to deter the Saenuri Party, but still lost to win a majority in the National Assembly.

The roundtable expressed its support for the DUP’s primary process, while asking to open it up to meet public expectations. It appeared that the group was asking the DUP to engage Ahn in the future.

The group showed no reservations in criticizing the Saenuri Party. “If they managed to win by reform sweet talk, without self-reform, it will likely be a disaster for South Korea, the Korean Peninsula and East Asia,” they said.

“If Ahn decides to stand down, that still won’t help a DUP candidate,” said Paik after the press conference. “Whether he will be the consolidated liberal candidate or whether it will be the DUP candidate, he must come out now and strengthen the race.”

Paik, however, denied that the roundtable was forcing Ahn to join the DUP to consolidate the candidacy.

Asked if he had contacted Ahn about the matter, Paik said, “It doesn’t mean that we have no contact, but I don’t have a close relationship with him.”

The roundtable said it didn’t inform Ahn in advance about the press conference.