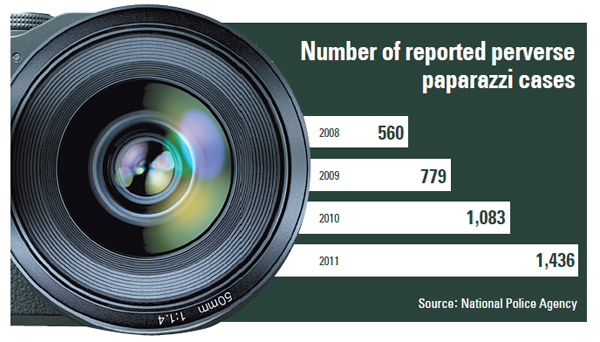 They hid themselves behind a column next to an exit of the station and watched carefully as a man repeatedly went up and down an escalator.

When a woman in her 20s wearing a short skirt took the escalator, the man stood behind her and looked around for few seconds.

He then pulled out his black smartphone and put it under the lady’s skirt. At the moment, a police officer who received a call on a wireless radio from his colleague at the lookout appeared and grabbed the man’s wrist.

As the man was caught with evidence, he had no choice but admit his guilt. The number of crimes involving men secretly taking inappropriate photos of women is increasing.

The National Police Agency (NPA) said these cameramen share pictures on the Internet after creating a Web site and also sell them for money.

The NPA said the number of suspects caught taking illegal photos and selling them was 1,436 last year, up from 560 in 2008. The offenders are usually caught through stings similar to the one above.

The culprits are all different. Incumbent military officers, civil servants and even priests have been arrested for illegal photography. These photos are taken in elevators, on stairwells, in subway cars, inside of restrooms and on escalators among other places.

The JoongAng Ilbo accompanied the police from 7:30 a.m. to 9:30 a.m. and 6 p.m. to 9 p.m. on Aug. 17 at several stations, including the Seoul and Gangnam subway stations, where most of the crimes are recorded.

The police said Seoul Station has the most reported cases of peeping. Some 85 cases of the perverse paparazzi were reported from June to August in 2011 and June to July this year. Gangnam Station reported 41 cases and the Express Bus Terminal Station was next with 28 cases.

The station that marked the biggest jump in crimes is Gangnam Station, up from six last year to 35 this year.

“We put warning signs at the escalators in Seoul Station,” a spokesman for the police said. “We think that some suspects have moved to Gangnam after seeing the signs.”

The signs simply warned that people who were caught taking photos would be punished. A bigger problem is that these photos are being distributed and sold on the Internet with victims’ faces left unedited.

On an Internet file-sharing Web site, a message was posted that read: “I have 2 terabytes of pictures and video clips taken in a women’s restroom. I can sell access to the photos for 30,000 won [$26] a person if you bring 20 to 30 people to sign up on the Web site.”

“The punishment for these perverse photographers is too light,” said police administration professor Lee Yoon-ho at Dongguk University. “The police should strengthen the crackdown on the distribution of adult content.”

On Wednesday, the police arrested a 35-year-old amateur photographer who had been posting pictures of women wearing short skirts and revealing tops.

The police said that Oh invested more than 10 million won to buy a high-performance digital camera so he can take pictures from a long distance. He and another suspect surnamed Kim, 34, a priest, were arrested for child pornography in March.