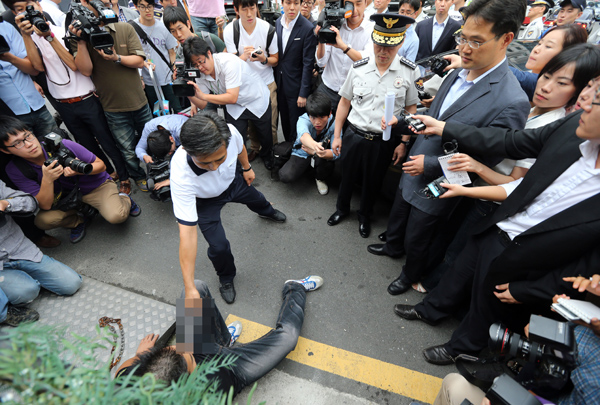 Kim Ki-yong, in uniform, commissioner general of the National Police Agency, watches a reenactment by police officers yesterday of the stabbing rampage on Wednesday evening in Yeouido, western Seoul. [YONHAP]


A string of brutal and sometimes fatal crimes against random strangers has jolted the nation, with the latest occurring in the middle of Seoul on Wednesday. Since Aug. 17, there have been eight violent crimes in which men armed with knives or box cutters attacked strangers - possibly lashing out at society as a whole.

All of the suspects were on the losing side of Korea’s competitive society, unsuccessful in keeping up with the Kims and achieving upward social mobility.

On Wednesday, a disgruntled unemployed man surnamed Kim returned to a former workplace in Yeouido, western Seoul, and allegedly stabbed two of his former colleagues. The suspect had 200 won ($0.18) in his pocket when he was arrested and was living in a tiny Seoul apartment. The 30-year-old Kim plotted the attack because he believed he was forced to quit his job after his co-workers said bad things about him.

After the stabbings, Kim ran and stabbed two passersby he thought were chasing him.

Another crime occurred Tuesday at around 9:30 p.m. in Jung District, Ulsan, when a 27-year-old man allegedly stabbed a female owner of a grocery store near his house. Police reported the suspect, surnamed Lee, was without a job and carried out the attack for no apparent reason. The Ulsan Jungbu Police Precinct reported yesterday that Lee has lived alone since his parents divorced 10 years ago. After middle school, he stopped studying and didn’t work. He lived in seclusion with a television set, subsisting on a monthly allowance of 200,000 won given by his parents. Lee told police he wanted to die with the victim.

Earlier that day, a 39-year-old man named Kang Nam-jin allegedly tried to rape a female owner of a bar in Suwon, Gyeonggi, around 1 a.m. and stabbed her after the rape attempt failed. Kang, who has 11 criminal offences on his record, including sexual assault, also stabbed a customer entering the bar. The suspect then allegedly ran into a house with an open gate and fatally stabbed a 65-year-old man, surnamed Ko, sleeping on a couch, and also attacked his wife and son. The 65-year-old victim died of excessive blood loss while being transported to a hospital. Kang was a jobless man discharged from prison after serving a seven-year prison term for rape.

On Monday, another “rape-and-kill” crime occurred in Gwangjin District, eastern Seoul. A 41-year-old ex-convict with at least three sex crimes in his past allegedly attempted to rape and fatally stabbed a 36-year-old mother of two.

The 41-year-old sex offender named Seo Jin-hwan was released from prison last November after serving a term of seven and half years for raping a woman in 2004. The fact that the killer was wearing an electronic monitoring device on his ankle, designed to track his whereabouts, raised questions about the effectiveness of the devices.

Another knife rampage took place Saturday on a train heading to Seoul from Uijeongbu Station on the Gyeongwon Line when a jobless man surnamed Yoo allegedly began brandishing a box cutter, wounding eight people. The suspect started slashing when he was scolded by a teenager for spitting at him. Yoo, who is unemployed and lives alone, was on his way to find work in Seoul.

The suspects in all the cases were living on the fringe and had little to lose from their violence. Their desperation shows in the fact that most committed crimes in circumstances that barely left them a chance to get away.

“The crimes that have taken place this month wouldn’t have happened in the early 1980s or ’90s, when economic polarization between the middle and lower classes wasn’t as wide as it is today,” Lee Baik-chul, a professor of crime prevention and correction at Kyonggi University in Seoul, told the Korea JoongAng Daily yesterday.

“There used to be more opportunities to climb the social ladder through various means like education,” he said, “but they have become strikingly limited in recent years, discouraging and frustrating many in the lower class, and eventually leading them to commit crimes with no rationale.”

“The recent wave of crimes is an indicator of the tremendous pressure under which Koreans are placed in this ultracompetitive society,” said Park Gil-sung, who teaches sociology at Korea University. “Though it is true that Korea’s economic level has grown rapidly during the past half century, those who have broken away from social norms, like employment, feel mounting pressure and agitation due to a lack of a social safety net.”

“A fundamental change in the current social structure is needed,” said Lee of Kyonggi University, “to see a decline in the violent crime rate rather than merely increasing the number of police officers.”