Wettest August in years to get worse

Wettest August in years to get worse 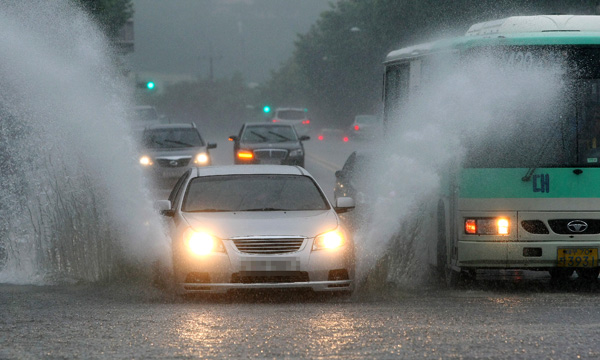 A passenger car runs through a flooded road in Suseong District, Daegu, yesterday. Twenty to 40 millimeters (0.7 to 1.5 inches) of rain fell per hour. By Gong Jeong-sik


The volatile weather oscillating between a sweltering heat wave and torrential rainfall this summer is not going to end soon, as meteorologists expect a powerful typhoon to hit the peninsula early next week.

Typhoon Bolaven is forecasted to reach Jeju Island next Monday, said the Korean Meteorological Administration yesterday. The KMA’s National Typhoon Center forecasts the southern regions of the peninsula may be affected by Tuesday, with winds as high as 160 kilometers per hour (100 miles per hour) and torrential rainfall.

Bolaven grew in the western North Pacific near Guam yesterday at 9 a.m. with a maximum wind speed of 144 kilometers per hour.

“It is still uncertain whether the typhoon will head toward China or the Korean Peninsula,” said Kim Tae-ryong of the National Typhoon Center. “But because of its high magnitude, whichever direction it takes, there needs to be precautionary measures.”

Typhoons usually follow a course on the edges of the North Pacific high pressure system. Likewise, if Bolaven follows this path, it will move toward Korea, weather experts foresee.

The meteorological administration further said it forecasts that as much as 300 millimeters (11.8 inches) of rain can fall between Monday and Tuesday in the southern coastal region of the country. 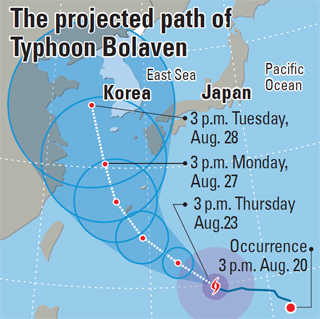 The level of precipitation in August was up 25 percent compared to 20 years ago. Between 1973-90, the average rainfall in the month of August was 236 millimeters nationwide, according to the meteorological administration. The KMA said the precipitation level rose to 296.6 millimeters from 1991-2010.

Following a dry spell last month, which lasted Aug. 1-9 in Seoul, there was no rain as the country was in the midst of an ongoing heat wave and drought, but 391.9 millimeters of rain have fallen since Aug. 10 as of yesterday.

Guerilla downpours, localized downpours in cities associated with the urban heat island effect during the summer, are on the rise, which contributes to the increase in rain.

In the 1970-80s, the rainy season was divided into “summer monsoon” season in mid-July and “autumnal monsoon” in early August, and precipitation was especially concentrated on mountaintops.

That pattern shifted in the 1990s, when the monsoon season lasted for a solid two months from the end of June until the end of August.

“The increase in rainfall in August is due to the increase in regional downpour,” said Kim Hyun-kyung of the climate prediction division of the meteorological administration.

He stated that icebergs in the Arctic Ocean “have melted at a record rate this summer,” and that because of this effect, the Siberian High, cold air that accumulates around Eurasia and creates high atmospheric pressure, “has become stronger than average, which can mean a cold winter.”