It’s a ‘winner take all’ time for stock markets

It’s a ‘winner take all’ time for stock markets 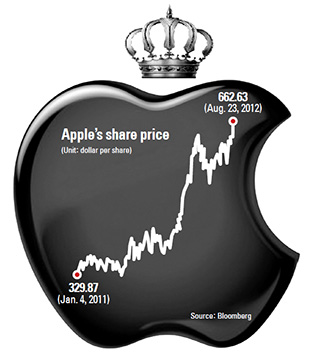 Apple was the urgent topic at water coolers at the stock market earlier this week when it wrote history by becoming the world’s largest public company.

The bourse-watchers’ conclusion: It’s a “winner-take-all” era with a handful of major companies getting investors’ attention while the rest struggle.

But on Monday its market capitalization broke the all-time record when it hit $623 billion, or $665.1 per share.

The previous record was held by Microsoft, whose market value topped out at $616.3 billion in December 1999.

The “winner-take-all” syndrome is true in Korea too.

Based on market capitalization, Samsung Electronics now makes up 16.9 percent of the Kospi as of yesterday, up 6.1 percentage point from 10.5 percent a year ago.

The nation’s second largest conglomerate, Hyundai Motor, and its main affiliate Kia Motors trail behind the tech company as the market capitalization of these companies take up 7.5 percent and 7.2 percent respectively.

As Samsung’s shares account for more than a quarter of the stock market, the market usually fluctuates accordingly to the movement of the tech giant. 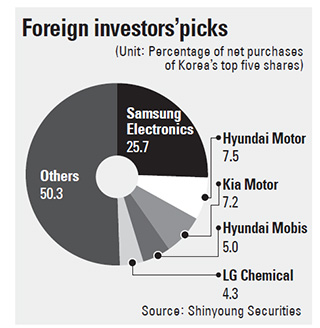 The market went up slightly?on Thursday; so did Samsung.

With Samsung’s shares increasingly exerting greater influence on the Seoul bourse, the fortunes of stock funds heavily depend on Korea’s largest electronics appliance maker, which is locked in a legal war with Apple, the iPhone maker.

Samsung’s influence is driven to a large extent by foreign investors.

Foreign investors’ net purchases of those companies ranked in the top 50 market capitalization makes up 80 percent of their net buying in the Kospi.

“Only the profit pie of the globally No. 1 enterprise is growing,” said Cho Yong-joon, chief analyst at Shinyoung Securities.

This is very much like Apple, which recently has been the major driving force pushing up the Nasdaq.

Why are investors sticking with a few top companies?

Analysts say investors who are worried about the global economy are keeping their money in shares of each nation’s top enterprise. The trend is likely to continue considering the bleak outlook for the global economy.

The global stock market bounced back after Mario Draghi, Europe Central Bank president, announced that the ECB is committed to doing whatever it takes to resolve the fiscal crisis in the euro zone. But without a strong solution stock markets around the world continue to fluctuate and rarely move upwards for many days in a row.

Stock markets in Germany and the United States are showing signs of some upward movement but the bourse in China has been at rock bottom.

This comes at a time when some analysts project that China’s growth has slowed. In the first half of the year, China’s growth fell to 7 percent, raising questions as to whether China will achieve 8 percent growth this year.

The recovery of Italy and Spain, which are at the center of the euro zone fiscal crisis, has been slow.

Given the mood, some say the current prevalence of Apple and its rival Samsung will continue.