Samsung ahead in patent battle

Samsung ahead in patent battle 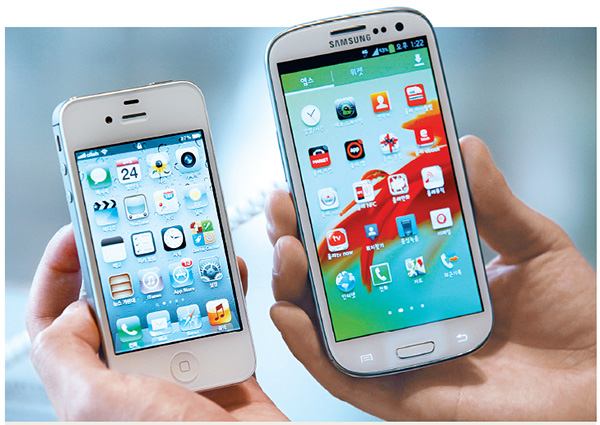 Samsung Electronics was granted a partial victory in a patent infringement suit against its U.S. rival Apple on home turf yesterday as a local court ruled that Apple breached two of Samsung’s technology patents.

It also ruled that Samsung had copied one technology of Apple’s. Each company was ordered to pay the other a modest fine.

The ruling came just before a California court was set to rule on a similar battle over patents. Most of the patents at issue in the Seoul case are also being fought over in San Jose, California.

The Seoul Central District Court ruled yesterday Apple infringed on two telecommunications-related patents owned by Samsung and ordered the iPhone maker to remove the iPhone 3GS, iPhone 4, iPad 1 and iPad 2 from shelves in Korea. The order does not include the latest products, the iPhone 4S and the most recent iPad.

Given that the iPhone maker is now believed to have breached key patents related to telecommunications technology, including transmission of power and using radio resources in an efficient way, Apple is expected to face further risks with those technologies when it launches new products.

“While the overall design of the devices including the rounded corners are similar [to Apple’s], Samsung’s products are differentiated with a center button,” Bae said.

The court ruled that Samsung violated one of Apple’s utility patents, which is related to the screen’s bouncing-back ability. As a result, it banned Samsung from selling the Galaxy S2 in Korea, and told it to pay Apple 25 million won in compensation.

“We welcome today’s ruling, which affirms our position that Apple has been using our mobile telecommunications standards patents without having obtained the necessary licenses,” said Samsung in a statement released yesterday.

Although the court said Samsung breached Apple’s “bouncing-back” patent, the company has developed an alternative technology to replace it in future products.

Yesterday’s verdict covered a patent infringement suit filed by Samsung at the Seoul court on April 21, 2011, demanding 100 million won in compensation, following Apple’s filing with a federal court in California on April 15. Apple countered with its own allegations with the court in Seoul on June 23, 2011.

The California ruling is deemed more crucial than the Seoul ruling for Samsung in terms of money and influence on the market. Apple is demanding $2.5 billion in compensation. A ruling was expected as early as last night.

Analysts said it was possible the Seoul ruling in favor of Samsung could affect the nine-member jury in California.

“The U.S. jury is not allowed to hear any news about related rulings, but in this case of an epic struggle in the smartphone world, there is a possibility,” said Koo Tae-un, an IT patent suit expert.

Samsung is actually worried that such a leak might prejudice American jurors. “We are concerned that the Californian jurors might misunderstand that the Seoul court took sides with a local company on its home turf, handing down a biased ruling,” a Samsung official said.