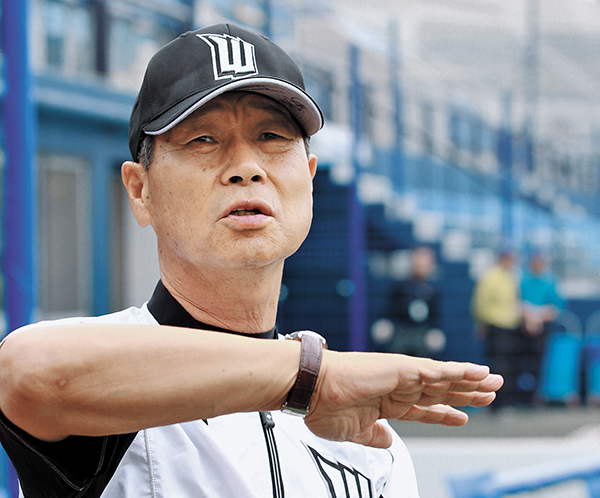 
Kang Ha-seung, a 23-year-old outfielder of the Goyang Wonders, an independent baseball team that competes against minor league clubs in the Korea Baseball Futures League, pushed his limits. And on Wednesday, Kang’s dream became a reality: He officially became a member of the Kia Tigers.

“If I set my limits before I started, I wouldn’t even be standing here,” Kang said.

The Wonders, who were established only eight months ago, have sent three players to the big leagues. Kim Young-kwan, a 27-year-old infielder, joined the LG Twins on Tuesday, following left-handed pitcher Lee Hee-sung, who joined the same club July 6.

Hopes for a second chance in the KBO have grown because of these players. For many athletes who were on the verge of making the professional league, independent teams like the Wonders have become launching pads to restart their careers.

“When Kang started training last December, he had problems with his throwing and bat speed,” Kim Sung-keun, the manager of the Wonders, said on Wednesday.

“Now he is better at throwing a ball and his swing has improved. He became a strong player who doesn’t miss a chance to score.”

Kang was the star of Gwangju Jinheung High School. He was a big-gun outfielder who made headlines. But after entering Dongguk University in 2008, he lost his early shot at the pros due to injuries and an ensuing slump.

None of the professional league teams mentioned his name during a meeting to select new players in 2012. He even took a test to become a trainee for a professional team, but he wasn’t hired.

Manager Kim recalled last December’s training in Jeonju, North Jeolla: “The players experienced failure. Although their talents were important, I worried more about their sense of defeat.”

Yet Kim didn’t give up. As the team started off-season training in January in Kochi, Japan, Kang told the players, “Let’s bet whether the pitching machine gets broken first or we get knocked down first.”

With their hard work and talents, the Wonders had a stellar season. A scout from the professional league started mentioning players’ names, with three eventually getting the call.

“They are good enough to play in the Futures League now.”