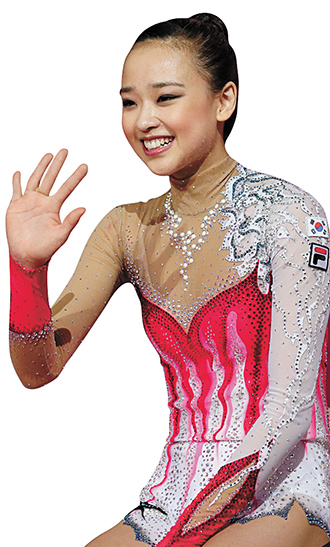 Eighteen-year-old rhythmic gymnast Son Yeon-jae may have returned to Seoul without a medal, but she rose above other gold medalists to be named Koreans’ favorite athlete at the London Olympics, a recent survey by an advertising firm found.

In the survey conducted by Innocean, an advertising arm of Hyundai Automotive Group, a total of 500 Korean respondents aged 20 to 50 who watched the Olympic games were given choices of 33 athletes who won medals and three popular players who failed to win a medal - Son, weight lifter Jang Mi-ran and volleyball player Kim Yeon-kyoung.

Son also topped the list of athletes when the respondents were asked who is best suited for commercials, receiving 79 percent of the vote. Second- and third-place spots were taken by Yang and Park, respectively.

Innocean added in an analysis that the survey participants seem to have chosen Yang particularly because the 19-year-old became the first Korean gymnastics gold medalist after overcoming an extremely impoverished childhood.

The ill-fortuned fencer Shin A-lam, who ended up earning no medal in a highly disputed decision by the judges, and archery gold medalist Ki Bo-bae were also cited as corporate commercial candidates.

The vaulter was given food and an apartment after the story of his childhood was publicized.