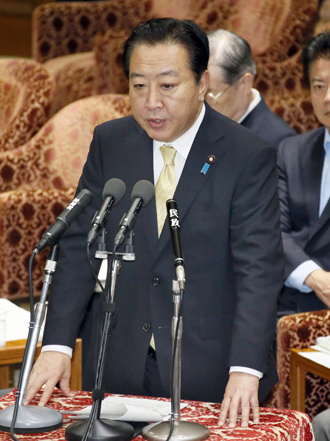 Japanese Prime Minister Yoshihiko Noda says yesterday that President Lee Myung-bak should make an apology for his demand of an apology from Japan’s emperor. [YONHAP]

Japanese Prime Minister Yoshihiko Noda said yesterday that President Lee Myung-bak should withdraw his demand for an apology from the Japanese emperor and should make an apology.

Noda referred to Lee’s recent demand for an apology from the Japanese emperor for wartime atrocities against Korean women.

At a budget committee meeting in the lower house of the Diet yesterday, Noda said that Lee’s request is “common sense derailed” and Noda demanded Lee’s “apology,” which has a meaning of legal responsibility in Japanese, yesterday.

The Blue House reacted contemptuously. “We don’t think there is a need to respond to this nonsense garbage,” a presidential aide said.

Korea yesterday tried to return a letter sent from Noda proposing international arbitration regarding the dispute over the sovereignty of the Dokdo islets, but the Japanese refused to accept it.

A Korean diplomat in Tokyo, Kim Gi-hong, tried to enter the Japanese Foreign Ministry yesterday to return the letter, but the ministry blocked his entrance. Kim stayed there for an hour and left. Afterward, Seoul put the letter in the mail as a registered letter.

Diplomatic tensions have flared since Lee’s surprise visit to Dokdo earlier this month. An angered Noda sent a diplomatic document on Tuesday through the Japanese Embassy in Seoul that proposed taking the issue to the International Court of Justice, a position Korea had already rejected.

Japan protested the attempted return of the letter. Chief Cabinet Secretary Osamu Fujimura said at a press conference yesterday that, “You can’t return a letter between prime ministers based on diplomacy customs,” the Yomiuri Shimbun reported.

Ministry of Foreign Affairs and Trade spokesman Cho Tai-young said at a daily briefing that Tokyo’s proposal for settling the issue of Dokdo, a small group of rocky islands off Korea that Japan calls Takeshima, at the International Court of Justice is “definitely unjust.”

“[The letter] contains unjust content that isn’t acceptable at all,” Cho said. “It’s so natural to return that kind of letter.”

The Yomiuri Shimbun also reported that Shinsuke Sugiyama, director-general of the Japanese Foreign Ministry’s Asian and Oceanian Affairs Bureau, met with Daniel Russel, senior director of Asian affairs at the U.S. National Security Council, and Kurt Campbell, assistant secretary of state for East Asian and Pacific Affairs, on Wednesday, to seek U.S. cooperation on the issue.

After the meeting in Washington, he told Japanese reporters that he explained “an international dispute should be resolved according to international law” and that his U.S. counterparts “supported” Japan’s position.

Refuting Tokyo’s claim that Korea is committing a serious diplomatic gaffe, a high-ranking Korean Foreign Ministry official told reporters yesterday that Japan made the initial mistake. “When they first sent the letter, they loaded it on the Japanese Foreign Ministry’s home page before we received it and read it,” the official said. “It’s them that committed an act of disrespect.”