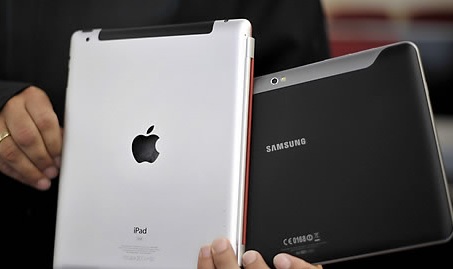 The verdict by the nine-member jury in a federal court here will apparently deal a serious blow to the South Korean electronics giant's sales of smartphones and tablet computers in the U.S. market.

The verdict on the high-stakes patent dispute between the two firms came after more than a year of legal fights. It represented a clear victory for Apple, based in Cupertino, California,

Apple argued that Samsung has virtually copied iPhones and iPads.

Samsung claimed it is Apple that infringed its patents on wireless telecommunication.

In a similar but smaller lawsuit, a Seoul court ruled earlier this week that both Apple and Samsung violated each other's patents.

The Seoul Central District Court ruled that Apple infringed two of Samsung's patents, including one for wireless technology, and Samsung infringed an user interface feature developed by Apple.

But it dismissed Apple's claim that Samsung infringed its design patent.

Samsung and Apple are engaged in more than 30 lawsuits in South Korea, the U.S. and seven other nations.

The rulings in South Korea and the U.S. may affect other legal battles. [Yonhap]