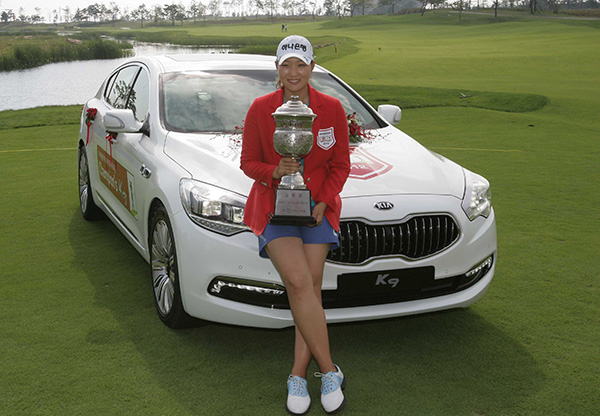 Lee Mi-rim poses with her trophy next to the K9 sedan she received as a prize after winning the Korea Women’s Open, the biggest event on the Korean women’s Tour, yesterday. She also won 130 million won ($114,540) in prize money at the event held at the Jack Nicklaus Golf Club in Songdo, Incheon. Kia Motors sponsored the event. It is the 22-year-old’s second victory on the Korean LPGA after she clinched the S-Oil Champions Invitational in June last year. Lee turned professional in 2009 and has played as a regular on the Korean Tour since 2010. Lee entered the final round of the Korea Women’s Open tied with Kim Hye-yun, Kim Ja-young and Kim Ji-hyun for the lead, but four birdies early on helped her secure the title. [YONHAP]