The ruling Saenuri Party lawmakers give a briefing on the rough draft of economic democratization policies that includes lowering the amount of stakes nonfinancial companies could hold in banks from the current 9 percent to 4 percent at the National Assembly in Yeouido, southern Seoul, on Thursday. [NEWSIS]

Major conglomerates are under heavy fire over their control of nonbanking financial institutions due to the growing economic democratization movement in the political community as the presidential election nears.

“Since the [recent] financial crisis, it has become a global trend to strengthen the separation between the industrial and financial sector,” Park said in a meeting with reporters.

However, she stressed that the aim is not to get rid of the existing conglomerate system but to reduce the economy’s heavy dependency on conglomerates.

“Our interest is not in the corporate structure but on the concentration of economic power [of conglomerates,],” Park added. “We are trying to level the playing fields where conglomerates are hugely dominant.”

On the same day, a special committee announced several ideas that would not only reduce the influence of conglomerates in the financial sector, but also distance the nonfinancial sector from the nonbanking financial companies.

One of its proposals included lowering the limits of stocks that manufacturers and retailers could own in banks from the current 9 percent to 4 percent.

Additionally, nonbanking financial companies, such as insurers and credit card companies, which are under the wings of conglomerates such as Samsung or Hyundai Motor, would have to be placed under separate financial holding companies.

The majority shareholder of these financial holding companies would be strictly evaluated, therefore preventing anyone with a criminal record from having a controlling influence.

“We’re not targeting a specific conglomerate,” said Kim Se-yeon, Saenuri lawmaker. “In principal it is appropriate to resolve the issue [of heavy concentration on conglomerates] as Samsung’s influence on the economy is exceptionally huge while the industrial and financial investments are intimately tangled.”

The lawmaker said this was, however, not the final version and that the details are still being discussed.

The Democratic United Party (DUP) is pushing a similar idea but with more aggressiveness.

While there are still disagreements among members of the ruling party on tightening the regulations, the DUP is more outspoken in adopting the 4-percent rule in the nonbanking industry while lowering the stake ownership in banks to 4 percent as it was under the previous Roh Moo-hyun administration. Stock prices of the nonbanking financial companies fell on Friday compared to the previous trade at the news on the Saenuri party announcement, which was announced after the market was closed on Thursday.

Under the current law, nonfinancial companies, whether they are manufacturer or service oriented businesses, such as retailers, are not allowed to own more than a 9-percent stake in a banking group.

Before the second half of 2009 the banking legislation was much stricter as the limit was at 4 percent. However, a bill that eased the ceiling passed in the National Assembly that year.

There are no limits to how much stake a nonfinancial institution can own in a nonbanking financial company.

Back then the government and the ruling party forced the bill that would ease the ceiling in the stakes that nonfinancial companies could have in banks.

The argument was that in the rapidly changing global financial market, the banking industry could tap into the vast pool of funding that the nonfinancial businesses collected from the profits that they made.

The ruling party also insisted that the larger funding from the nonfinancial companies would contribute to the improvement of the domestic economy as the banks would have a larger amount of finances it could lend from and therefore encourage businesses to increase their investments, which would eventually lead to jobs.

According to the Fair Trade Commission, there are currently 29 nonfinancial corporate groups that own 112 nonbanking financial companies, including insurers and brokerages.

If the 4-percent rule is expanded to the nonbanking sector it would land a heavy blow.

This is especially the case for Samsung, who would have to dump a huge amount of shares it has in these financial companies. Samsung Everland, which is currently managed by the eldest daughter of Samsung Group Chairman Lee Kun-hee, is the second-largest stakeholder of Samsung Life at 19.34 percent, or over 38 million shares. Chairman Lee is the largest stakeholder of the insurance company with a 20.76 percent stake.

Samsung Electronics, where Lee’s only son and apparent heir to the leading business empire in Korea is registered as CEO, is the majority shareholder of Samsung Card with a 35.29 percent stake, or 43 million shares.

It’s the same story for Hyundai Motor, which owns 31.52 percent of Hyundai Card whose President is the son-in-law of the automotive group’s chairman Chung Mong-koo.

The same goes for the nonbanking financial companies that have a controlling stake in the nonfinancial companies. Samsung Life is the majority shareholder of Samsung Electronics, while Chairman Lee is the second-largest stock owner.

Even the hint of applying the 4-percent limit to the nonbanking sector is a huge threat to businesses as those who oppose such moves argue that it makes domestic companies vulnerable to hostile foreign takeovers.

In the case of Samsung Group, the chairman controls his empire through the entwined stakes he holds among its affiliates.

When adding the 3.38 percent stake that Chairman Lee has in the electronics company, as well as the 7.21 percent held by Samsung Life, the chairman could summon more than 17 percent of shares to defend against any hostile foreign predators. In fact, foreign investors currently own nearly 50 percent of the Korean company.

Fortifying Samsung Electronics is essential to the nation’s No. 1 conglomerate as its flagship takes up 70 percent of the group’s operating profit. Losing the company would land a devastating blow to Lee’s empire.

“In no other country is there a law that limits nonfinancial companies from owning stakes in the nonbanking financial companies,” said an official at the nation’s largest business lobby group, the Federation of Korean Industries.

“This is discrimination against local businesses at a time when global competitiveness is fierce.”

An analyst who requested anonymity complained that politicians are trying to push forward anti-business regulations to win votes for the election in December.

The biggest risk that they see is that the conglomerates will use the banks as their personal piggy banks and could therefore start a major financial debacle, especially when the companies struggle and dip into the financial resources stored in banks, which are in fact customers’ money.

“Strengthening the fundamentals on the regulation that would separate the industrial from the financial sector once again would not only prevent risk in the financial market as the global financial crisis continues, but also prevent the conglomerates from using the banks at their personal disposal,” said Kim Ki-shik, DUP lawmaker.

“The distortion of conglomerate’s corporate governance not only offers opportunities for these businesses to expand to various fields but monopolize the market and the burden that comes from the damage would all be carried by the public, including small and midsize companies and private entrepreneurs.” 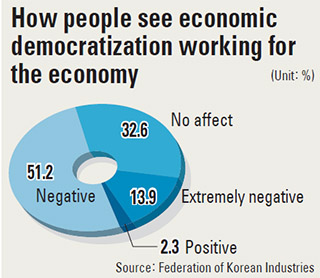 Although market observers agree that the economic structure where major conglomerates dominate the market needs to be reformed so that smaller and midsize businesses can thrive, they also warned against the impact that excessive economic democratization policies might have, especially when the economy is struggling.

In a recent poll by the Federation of Korean Industries, economists and market observers said that economic democratization would have a negative impact, especially when the Korean economy is dwindling.

In a survey of 43 economists and experts in the financial industry, 74 percent answered that the Korean economy will witness a flat growth in the immediate future.

Nearly half of the survey participants said improving the conditions for companies to increase their investment that would lead to higher employment is more urgent that pursuing economic democratization.