In the eyes of one student, there’s room to improve

In the eyes of one student, there’s room to improve 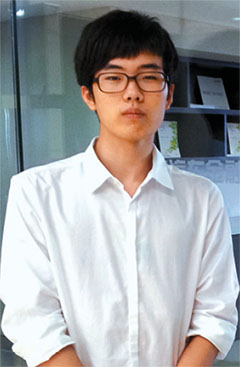 Although Korea and China have made significant improvements in political, economic and cultural ties, some hostility and prejudices do still linger.

Some analysts say the biggest problem actually lies in the countries’ younger generations, which will be engaged in vital 21st-century discussions between the two states in the years to come.

Li Min, 22, is currently taking part in an internship at a Hyundai affiliate in Beijing, and Lee Seul-yi, 21, hopes to land a job in China.

The following interviews capture the views of only two students discussing a vastly complex issue. They represent their views alone. Both touched on common topics, such as the influence of pop culture and tourism, and suggested there is room to improve in the important Korea-China relationship.

Q. Before coming to Korea, what was your image of the country? And after coming here, how has that changed?

A. Before, the images that I associated with Korea included a strong community spirit, its “rush-rush” culture and ubiquitous cosmetic surgery. But after I came to Korea, I discovered new things about the country. I was surprised there were so many foreign students and tourists. I believe the high number of foreigners is a testament to the strong influence Korea has in the world. I also read about how Korea’s Samsung Electronics and Hyundai Motor Group are posting high sales in China. It seems Korea has emerged as a major economy in the world.

Do you believe Koreans and Chinese are friendly toward each other? What are your thoughts on recent discriminatory online postings?

If you look at how popular K-pop is in China, you can say the two countries are friendly toward each other. K-pop groups succeed in sales of their albums and performances in China year after year.

But I also see many Koreans criticizing China and the Chinese people - not just online. Some of this could be due to cultural differences, but a majority is because of groundless reporting and some netizens’ messing around.

The biggest problem is if such misunderstandings and misconceptions continue, they can develop into hard feelings and prejudices. And in the end, the first thoughts that come to mind when a Korean sees a Chinese or vice versa are negative.

Hallyu is still strong in China. For instance, there was a Big Bang concert in Beijing on Aug. 4. It was sold out. Also, every time I go home [to China], my friends ask me to get certain albums of Korean singers. Most of the Chinese interest in Korean culture is about contemporary pop culture and not necessarily traditional culture.

What kind of cultural exchanges would you like to see as Korea and China celebrate 20 years of diplomatic relations?

Most of all, I wish the two countries would become more friendly toward each other.

Although economic exchanges between the countries are more active than between other countries like the United States or Japan, their “friendliness index” is much lower - 7.2 percent for Korea toward China and 15 percent for China toward Korea, according to DuDu China, a Web site on China.

Also, I’d like to see a Korea-China free trade agreement signed as early as possible, as it will benefit the economies of both countries.