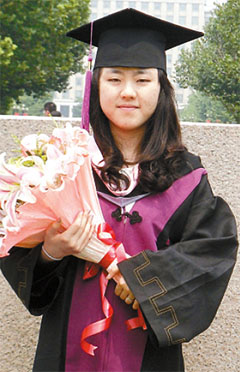 Although Korea and China have made significant improvements in political, economic and cultural ties, some hostility and prejudices do still linger.

Some analysts say the biggest problem actually lies in the countries’ younger generations, which will be engaged in vital 21st-century discussions between the two states in the years to come.

Li Min, 22, is currently taking part in an internship at a Hyundai affiliate in Beijing, and Lee Seul-yi, 21, hopes to land a job in China.

The following interviews capture the views of only two students discussing a vastly complex issue. They represent their views alone. Both touched on common topics, such as the influence of pop culture and tourism, and suggested there is room to improve in the important Korea-China relationship.


Q. Before going to China, what was your image of the country? And after going there, how has that changed?

A. The images I associated with China came mainly from books. I thought China was a really big country, but almost as poor as North Korea. Also, I felt distant from China - compared to Japan, for instance - culturally. And the stories I heard from my acquaintances who visited China made me think China was underdeveloped and unsafe.

But since I began living in Beijing, I have found it to be a dynamic city that is developing rapidly. People’s standards of living are also as high as those of Koreans’ and prices are quite high. Of course, there has been much progress since I came here in 2001. But in general, I find the city to be quite secure and the environment pleasant.

Do you believe Koreans and Chinese are similar and friendly toward each other? What are your thoughts on recent discriminatory online postings?

I think Koreans and Chinese have many similarities. Both consider “saving face” as quite important. And both of the societies consider connections in terms of schools people attend or hometowns they come from as important. However, I do not think Koreans and Chinese are friendly toward each other. They tend to ignore and blame each other in terms of their different views on history and cultural differences.

But actually, living in China, I find quite a number of Chinese people interested in Korean culture and who have a positive perception toward the Korean people. In that sense, I think the slanderous and offensive remarks online are the opinions of a minority.

But Koreans tend to openly express how they do not like Chinese. I see such people quite frequently around me. I think they have come to feel that way about Chinese because of their low civic consciousness, but such attitudes cannot be good for Korea-China ties.

What are some of the aspects of China that you admire? What about aspects do you think they need to improve on?

I think China’s biggest strength is its enormous manpower and resources. Because of them, China is growing at an impressively fast pace, increasing tensions with neighboring countries as well as other advanced nations.

But China’s weakness is its people’s low civic consciousness. When you see how things are dealt with on streets or public institutions, you can tell how they have a very low awareness of public order and etiquette. This could factor as a stumbling block for China’s growth.

Many of my Chinese friends who visited Korea wish to visit Korea again. But they are concerned about communication. They said when they visited major tourist attractions, the signs were available in English and Japanese but they were rarely available in Chinese. Also they couldn’t strike very basic conversation with Korean people in Chinese.