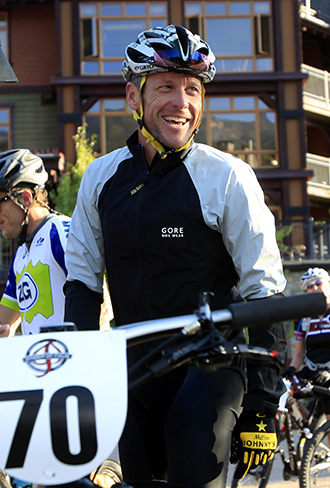 Lance Armstrong was back on his bike on Saturday, urging his supporters not to “cry” for him a day after the decision by the United States Anti-Doping Agency (Usada) to strip him of his seven Tour de France titles and ban him for life.

In his first public appearance since announcing he would no longer fight doping charges brought by Usada, Armstrong finished second in a 36-mile mountain bike race in Aspen, Colorado, five minutes behind a 16-year-old rider, Keegan Swirbul.

Wearing sunglasses and black and gold riding gear adorned with sponsors’ logos, Armstrong appeared unfussed by the media throng that had traveled to the mountain resort amid concerns his legacy has been irrevocably tarnished.

“Nobody needs to cry for me. I’m going to be great,” Armstrong told reporters.

“I have five great kids and a wonderful lady in my life. My foundation is unaffected by all the noise out there.

“I think people understand that we’ve got a lot of stuff to do going forward. That’s what I’m focused on and I think people are supportive of that. It’s great to be out here,” he said.

Despite giving up the fight against the charges, Armstrong has maintained his innocence and railed against what he says is an unfair witch-hunt.

The Texas-born cyclist, who famously beat cancer and whose foundation Livestrong has raised hundreds of millions of dollars in the fight against the disease, has retained major sponsors and enjoyed the backing of many key cycling figures.

Others, including WADA chief John Fahey, say his failure to contest his charges can only mean he is a drug cheat who has defrauded the cycling tour, his rivals and millions of sports fans for over a decade.

The Armstrong case has yet to rest, with cycling’s global governing body, the International Cycling Union, demanding Usada hand over its evidence.

The Court of Arbitration for Sport could ultimately have a final say on his guilt or innocence.