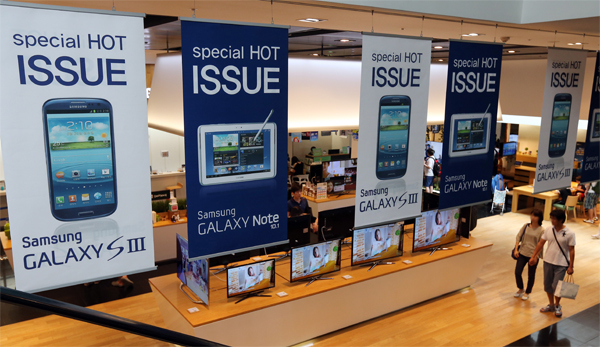 Banners promoting Samsung Electronics’ latest Galaxy S3 smartphone and Galaxy Note are on display at the company’s headquarters in Seocho-dong, southern Seoul, yesterday. A jury in the United States concluded on Friday that the Korean tech king copied Apple’s technological innovations used in its iPhone and iPad. [YONHAP]


The jury in the landmark intellectual property suit in the United States ruled on Friday (Pacific Standard Time) that Samsung Electronics infringed on six of seven patents for Apple’s mobile devices, awarding the U.S. tech giant $1.05 billion in damages. Jurors found no infringement by Apple on any of the Korean company’s utility patents.

Following a shorter-than-expected period of deliberation that started on Wednesday, the nine-person panel concluded that Samsung “willfully” violated Apple’s patents, including its bounce-back scrolling function, pinch-to-zoom and tap-to-zoom features.

Although the $1.05 billion in compensation - around one-fourteenth of Samsung’s operating profit last year - is less than half of the $2.5 billion that Apple had initially demanded, U.S. District Judge Lucy Koh may later triple the damages against Samsung under federal law.

The verdict is seen as one of the largest in patent history by experts.

The ruling made Saturday morning (Korea Standard Time) came less than a day after a Seoul court found that Apple violated two of Samsung’s five wireless technology patents, banning local sales of the iPhone 3GS, iPhone 4, iPad 1 and iPad 2. A number of Korean media dubbed it a “small victory” for Samsung, but the festive mood did not last long.

Samsung Electronics, whose share price has been setting new record highs on the back of successful global sales of its Galaxy smartphones and tablet PCs, faces the possibility of having a handful of its mobile gadgets withdrawn from the U.S. market.

The U.S. accounted for 16 percent of global smartphone shipments in the second quarter, according to market researcher Strategy Analytics.

Samsung is also in danger of being stigmatized as a technology “copycat,” industry figures warned.

“The jury has now spoken,” Apple CEO Tim Cook said in an internal memo sent after the ruling to the employees titled “An important day for Apple.” “We applaud them for finding Samsung’s behavior willful and for sending a loud and clear message that stealing isn’t right,” Cook said, adding that he hopes “the whole world listens.”

Samsung, which is almost certain to appeal the ruling, argued that the decision will hurt U.S. consumers.

“Today’s verdict should not be viewed as a win for Apple, but as a loss for the American consumer. It will lead to fewer choices, less innovation and potentially higher prices,” it said. “It is unfortunate that patent law can be manipulated to give one company a monopoly over rectangles with rounded corners, or technology that is being improved every day by Samsung and other companies.”

The electronics maker with the top market cap in Korea also vowed to “continue to innovate and offer choices for the consumer.”

The verdict has turned out to be much worse than was expected by most Korean analysts.

“We thought Apple definitely had an upper hand but didn’t predict such a sweeping victory,” said Song Jong-ho, a senior analyst with Daewoo Securities. “We predicted the jury would rule that Apple partially violated Samsung’s wireless patents and award damages of around $500 million.”

The legal battle between the two tech rivals began in April last year, when Apple sued Samsung in multiple countries including the U.S. and the Korean tech bellwether countersued, denying the allegations and arguing that all companies “mimic” each other’s successes.

The U.S. jury spent nearly four weeks this month in a federal courtroom in San Jose, California, near Apple’s Cupertino headquarters, mulling over details of the case before ultimately arriving at the verdict.

A number of key issues have yet to be addressed. Judge Koh could triple the damages, given that the jury used