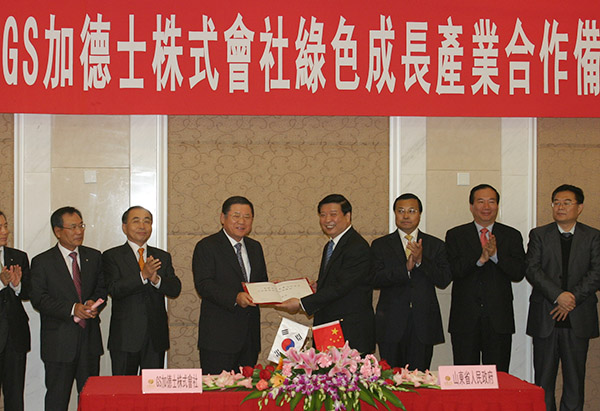 Hur Dong-soo, chairman and CEO of GS Caltex (third from left), receives a letter of appointment as an economic adviser from Jiang Daming, the governor of Shandong Province in 2010. Such letters are awarded to foreign figures who contribute greatly to the economic development of the province.


In a land where not a single drop of oil is produced, GS Caltex continues to expand its global market share amid lingering euro zone financial crisis.

The company does away with the tied-up local business structures and is expanding its export market share. Last year, GS Caltex recorded 47.946 trillion won($42.2 billion) in sales, 2.02 trillion won in operating profit and 1.236 trillion won in net profit. Recently its export grew threefold compared to 22 percent in 2001.

Especially last year’s 63 percent of the total sales is the highest ever recorded for the company, similar to the annual figure of Hyundai Motor Company, Korea’s export behemoth. GS Caltex garnered revenue amounting to 83.3 percent of the total cost of imported crude oil, as it imported $28.396 billion of crude oil and exported $23.664 billion of oil and petrochemical products. 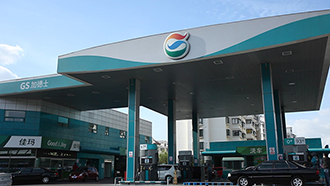 A gas station in Qingdao, established by GS Caltex in China for the first time

The factors behind the success of GS Caltex on this oil-dry part of the peninsula lie in part in the diversification of investment portfolios and infrastructure development to meet the demands of the constantly changing oil market.

As a famous case, there is the third vacuum residue hydrocracker (VR HCR) completed with 2.2 trillion won invested in 2010, the largest investment since the company’s founding. Heavy oil upgrading facility is a facility which changes the low quality intermediate oil extracted from crude oil into high quality diesel or gasoline. In addition, the company is constructing its fourth heavy oil upgrading facility a vacuum gas oil fluidized catalytic cracking unit (VGO FCC), by investing 1.1 trillion won. Once the VGO FCC is constructed next year, the company plans to export its entire amount and achieve 400 billion won of additional profit each year.

GS Caltex focuses on producing aromatics, or paraxylene and benzene. The complete aromatics products are mostly exported overseas including China. Last year, the company earned 87 percent of the petrochemical business sector sales from its export.

For the first time in the industry and as a first Korean company, it has set up a compounded resin company in the Czech Republic. In April it has signed an MOU with Taiyo Oil to increase an annual one-million-ton scale paraxylene production facility at its Yeosu factory in South Jeolla. Once the facility is constructed by 2014, annual production will increase from 1.35 million tons to 2.35 million tons per year. The product will be sold in the overseas market including in Asia.

Meanwhile, GS Caltex is also actively working to expand its exports in lubricant oil and base oil business. Base oil business is a sector that is laying golden eggs through strategic overseas marketing.

Last year the entire lube oil business recorded 1.643 trillion won in sales, 411.3 billion won in operating profit and 76 percent of total sales in export. GS Caltex is exporting 70 percent of its products to 13 countries including China and Thailand. Through its branch in China, Asia’s largest economy, the company was able to sign long-term sales contract with a major lube oil company.

The base source of lubricant oil, base oil business was first started by the company in 2007 and since then it has been showing an annual growth of more than 30 percent, achieving 1.4 trillion won in sales last year.

Already, GS Caltex is widening its lubricant oil business in the global market by opening a new branch in India and launching joint cooperation with Dongfeng Lubricants and Samsung C&T. It plans to establish a corporate body in China and Moscow branch within the year and expand local market share through tailored strategies. Through this, the company aims to increase the export portion of complete lubricant oil product business up to 50 percent by 2014, which is currently at 30 percent.

GS Caltex Chairman and CEO Hur Dong-soo said during the press conference in May, “We will make China our second domestic market. The company will concentrate on Shandong Province, which is regionally close to and has much physical exchange with Korea.

GS Caltex is currently constructing a logistics center where ships can dock with an oil storage tank.”

In the petrochemical and lubricant oil business of GS Caltex, it is made clear that the company is making successful strides in penetrating the China market.

Thanks to an MOU with Shandong Province from 2007, the company has a partnership in oil distribution and logistics with the government. A new focus has been green development, with another MOU signed in 2010.