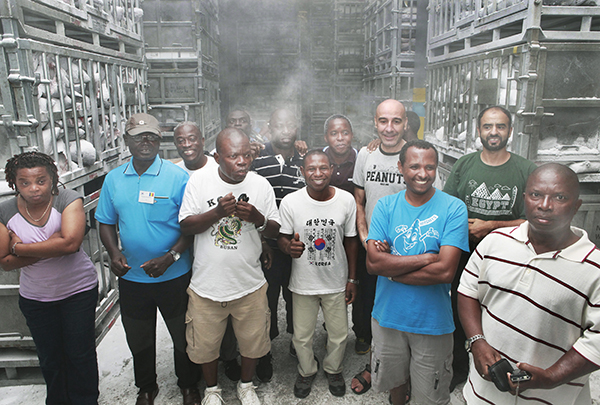 A group of 16 government officials working in the maritime industry from Africa stand in a freezer for two minutes with its temperature set at minus 60 degrees Celsius (minus 76 degrees Fahrenheit), managed by Dong Yeong Cold Plaza in Busan on Aug. 9. The trip to the storage facility was part of a 56-day training program jointly promoted by Koica and Busan’s Pukyong National University. It is designed to teach the 16 officials from eight different African countries about Korea’s expertise in the fisheries industry. By Park Sang-moon


A group of 16 government officials from eight nations in Africa stand in front of a large gate on Aug. 9, waiting to enter a walk-in freezer with a temperature of minus 60 degrees Celsius (minus 76 degrees Fahrenheit).

“Brace yourself for the freezing temperature inside!” warns a controller as the gate opens. The officials walk into the cooler, which stores frozen tuna.

Once inside, some of them start jumping around to generate body heat. The two-minute adventure into the freezer was part of a field trip to the Dong Yeong Fishery’s storage factory in Busan.

The high-ranking officials, all working in fields related to the maritime industry in their respective governments, visited a 60,000 ton-level logistics facility that stores marine products as well as general food goods in three storage units, each of which has its temperature set at one, minus 25 and minus 60 degrees Celsius, depending on product types, as part of their 56-day training session to learn about Korea’s advanced fisheries industry.

They visited Dong Yeong to learn about the technology used to safely keep seafood in a specially designed storage facility.

The sheer size of the three storage units all managed by a single factory impressed the African maritime experts.

“What surprised me from the trip today is the fact that one single company is capable of managing 60,000 tons of products that range from seafood to cheese to vegetables,” said Bwire Omanyi, a senior fisheries official from Uganda.

The factory’s control-room system that enables one employee to single-handedly manage electricity, storage temperatures and boiler systems by using a computer system also impressed many officials.

“So, the company can control the whole factory’s management systems here in a control room with only one person, and you even have access to CCTV footage of the storage building from your house via your smartphones .?.?. do you even get to talk to your wife at home then?” asked Jovice Mkuchu from Tanzania, with a grin on her face, who works for the ministry of fisheries department.

This year’s training program, a joint effort promoted by Koica and Busan’s Pukyong National University, is the sixth one of its kind, first starting in 2007. The program aims to teach African officials how the nation developed and cultivated its fisheries industry.

The 16 officials from Cameroon, Chad, Kenya, Ghana, Morocco, Uganda, Tanzania and Ethiopia were invited this year.

“We chose to come to Korea as it is a county surrounded by sea on three sides, sharing similarities with many nations we represent here,” John Apawudza, a regional officer at the agricultural ministry of Ghana, told the Korea JoongAng Daily.

When asked why Japan, a country with a lot of knowledge in the fishing industry, was not chosen for training, he said it was because of the “sense of wonder” African nations have about “Korea’s unprecedented economic growth.”

“Many of them have studied in countries such as Russia, Norway and Sweden that many consider more advanced in the maritime industry than Korea,” said Lee Sang-go, professor at the department of marine business and economics at PNU, who has been in charge of running the field trip for the 16 officials.

“But they chose to come here to learn our development experiences because they are aware of the fast transition that we have undergone, from the marginal economic level similar to that of some poorer African countries less than half a century ago, to today’s high standing, and they are curious to know how we have done it.”

A total of 24 lectures on maritime affairs are offered by 22 Korean professors, totaling 185 hours in addition to 20 field-trip hours from July 1 until Aug. 25, with a goal of helping the officials solve the long-standing problems shared by many African nations.

Their visit to the storage facility highlights challenges facing many nations in Africa striving to develop their fisheries industries.

“Due to the lack of infrastructure to keep seafood fresh in high temperatures, fisheries in Africa are limited to feeding local inhabitants despite the continent’s ample resources,” notes Hong Hyun-pyo, a researcher at the Korea Maritime Institute, in his thesis “Africa’s Fishing Industry and its Economic Development,” published in 2010.

“It is imperative for African nations to construct basic refrigeration facilities to turn the maritime products into high-value products.”

Their understanding of Korea’s development in the fishery industry extended to the secrets of the Korea’s success in pulling itself out of poverty to become Asia’s fourth-largest economy. And they were eager to adopt the secrets for their own use.

“‘Resources are limited, but creativity is unlimited.’ That sign was hanging inside Posco in Pohang,” said Abdennaji Laamrich, a Moroccan government official in marine affairs. “As soon as we read the line, all of us were stunned. I have noticed that Koreans place a big emphasis on finding and cultivating human talents. The slogan at Posco exemplifies that.”

“It never crossed my mind that human factors such as creativity could be counted as resources that could be invested and developed.”

“Koreans are excellent at maximizing the potential of their scarce resources, which many African nations often fail to do,” said Dereje Kokebe, an official at Ethiopian Institute of Agricultural Research.

“One example proving that is the way highway and high-rise apartment complexes are constructed here that maximizes the use of the limited land for 50 million people.”

“Korea will have a higher chance of securing abundant resources once these officials go back to their high positions in their respective governments, bringing back with them practical knowledge in cultivating their maritime industry they learned from us.”