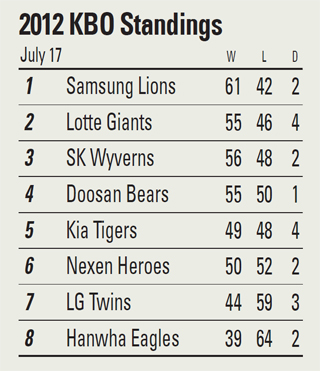 While the Samsung Lions have a solid hold on first place, only a half-game separates the second place Lotte Giants and third-place SK Wyverns, who are scheduled to open a series tonight in Incheon.

The Doosan Bears, who trail the Giants by two games, face the LG Twins starting tonight. The seventh-place Twins have shown strength against their Seoul rivals with eight wins in 14 games this season.

The Lions will try to pad their five-game lead when they meet the fifth-place Kia Tigers. The Daegu club is 8-3 against the Tigers this season. The Lions will play the sixth-place Nexen Heroes starting Friday.

Scott Proctor of Doosan, who has a league-leading 30 saves, is trying to become the second foreign pitcher to win the season save title. Jon Adkins of the Giants won in 2009.

But he is facing a challenge from Oh Seung-hwan of the Lions and Kim Sa-yul of the Giants, who are trailing the 35-year-old American by one save. Son Seung-rak of the Heroes has 26 saves. Oh recorded the most saves last season, after Son won in 2010.

With one more save, Proctor will tie the league record for the most by a foreign pitcher set by Brad Thomas of the Hanwha Eagles in 2008.

Meanwhile, Lions ace Bae Young-soo pitched seven scoreless innings against the Twins on Sunday, securing his 10th victory and the 100th of his career.

In a duel between former Major League pitchers - Park Chan-ho of the Hanwha Eagles and Seo Jae-weong of the Tigers - Seo allowed only three hits in five innings on Sunday. Park allowed five runs in 4 1/3 innings in a 6-0 loss.