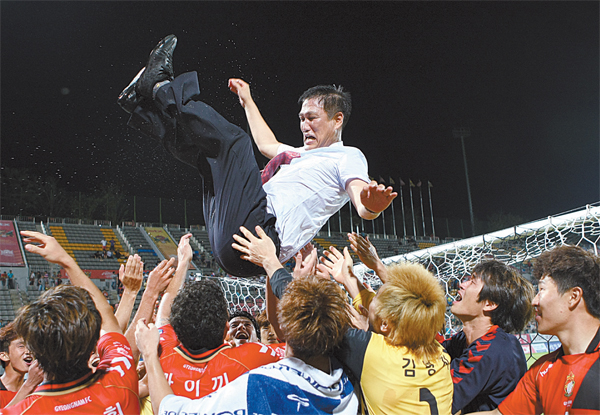 Gyeongnam FC players lift coach Choi Jin-han in the air in celebration after their 2-1 win over Gwangju FC on Sunday at Changwon Football Center in South Gyeongsang. Gyeongnam advanced to the top group of the K-League after Sunday’s season split. Provided by Gyeongnam FC


Many fans at the Changwon Football Center could only give their full attention to the action on the pitch when their home team, Gyeongnam FC, saw Ko Jae-sung equalize and Choi Hyun-yeon net the go-ahead goal in the second half to beat Gwangju FC 2-1.

During the rest of the game, they were busy with checking their phones and glancing at the real-time results of the two other ongoing K-League games on the stadium’s Jumbotron.

Daegu FC and Incheon United, both two points ahead of Gyeongnam heading into Sunday’s final games of the first half of the K-League season, were trailing 1-0 against FC Seoul and drawing 0-0 against Jeju United, respectively, halfway through the second half.

Gyeongnam was in position to grab the final berth to the eight-team top group.

The two worst teams in the bottom group will play in the second division National League next year. The system was established after a match-fixing scandal rocked the league.

Incheon was in eighth place, Daegu in ninth and Gyeongnam in 10th before Sunday’s matches.

Seoul scored another goal against Daegu in the 78th minute as Incheon and Jeju remained scoreless. The Gyeongnam fans were in song as the final whistle blew, waiting eagerly for their smartphones to refresh. When the results were clear, players lifted coach Choi Jin-han in the air in celebration. 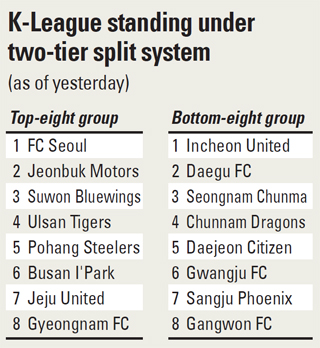 Coach Choi told reporters after the match that he was pleased with a top-eight finish after struggling early on in the season. The team suffered eight losses in the first 11 matches and was sitting in 14th place in mid May.

“I thought of resigning in April or May,” Choi said. “Today, I cried. I wanted to cry.”

The second-half of the season will kick off after a three-week break and will feature 14 matches for each of the teams. If the season ended today, Chunnam Dragons and Gangwon FC would be relegated. The two teams played against each other on Sunday, ending in a 4-3 victory for the Dragons.

With a 2-0 win over Daegu, Seoul will enter the second-half at the top of the league. The Jeonbuk Motors are five points behind.

Dejan Damjanovic of FC Seoul leads the league in goals in the first half with 21 while his teammate Molly is in second with 15. Their combined 36 account for two-thirds of their team’s 54 goals.

Eight of the top 10 players in the category were foreigners.