‘Fifty Shades of Grey’ story a red-hot read for women

‘Fifty Shades of Grey’ story a red-hot read for women 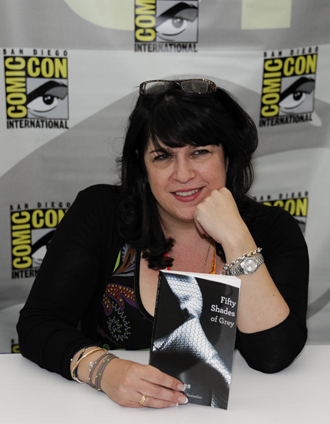 “Women know this is a fantasy,” says E.L. James. “But what really appeals is the love story.” [AP/YONHAP]

“Fifty Shades of Grey” by E.L. James, a romance novel for adults, is topping best seller lists around the world.

The Korean translation of “Fifty Shades of Grey” has been available in Korean bookstores since Aug. 7 and is topping e-book sales charts.

The JoongAng Ilbo communicated with James via e-mail.

As the book’s success takes her around the world these days, James is often away from her home in London where she lives with her husband and two children.

James said the book is a “love story with a kink” and that “Christian Grey doesn’t exist … He’s great on the page, but he would be hell to live with in real life.”

Q. You once remarked that you were “stunned” by the book’s unexpected popularity. Do you still feel this way?

A. Yes I do. I don’t think I’ll ever get over how popular these books have become. It’s been a complete and utter shock to me.

What do you think is the reason behind its popularity?

I think it’s popular because at its heart this is a passionate love story, and women like to read passionate love stories. Also, the hero is intriguing, sexy, successful and so competent in all that he does. And slowly, over the course of the novels, the reader gets to understand why Christian Grey is the way he is. It’s a story of love, redemption and the healing of a damaged little boy.

Sum up the book in five words.

Love story with a kink.

A Korean translation has been published recently. Korea is still very old-fashioned with Confucian traditions and morals, with a culture where sexual expression is repressed. How popular do you think this book can become in Korea?

The book is popular with women throughout the world, from Alaska to the Philippines. College students, grandmothers, housewives, doctors and lawyers have all enjoyed it. I don’t see why women from Korea would be any different.

In some places, the book is being burned and has been banned from libraries. How do you feel about that?

Fundamentally, I believe that book burning and banning is censorship and has no place in a progressive, inclusive, free society.

As a man and husband, do you consider Grey an ideal archetype?

Not at all. He’s a very damaged man.

I have read the book and there were not as many sex scenes as I had expected. Are you disappointed that it is only the sexual content of the book that the public is talking about?

I am glad that this is opening a dialogue for women and men. I love that these books bring women together to discuss the themes in the book- not only the sex, but the plot, characterization, mystery and, of course, Christian Grey.

How much do you think the sexual and physical aspect should take up in a relationship?

I would never dictate that to anyone. This is entirely up to couples in their relationships and is a personal choice for them.

Do you feel the popularity of the book among women stems from the desire for this kind of physical aspect in a relationship?

No. I think women are intrigued by it, but they also know that this is a fantasy. Fantasy man, fantasy lifestyle, fantasy sex, but what really appeals is the love story.

Do you think men are too ignorant of this kind of sexual desire that women have?

I think these books are an entertaining fantasy primarily aimed at women, but many men could learn a lot from them. I have had so many responses from grateful women saying that their husbands thank me, too.

Do you think men have to be more open about sex with women?

I think if they do, they will have a much more satisfying sexual relationship. Openness and honesty helps every relationship.

But it also works the other way around: women have to become more open with men about sex, and what they want. It’s all about communication, and I like that this book is encouraging couples to share their thoughts and feelings about sex.

What did your husband say when he read the book?

He very much enjoyed it.

What age do you think is appropriate for readers of this book?

I would not be comfortable to think it was being read by anyone under 16.

I designed the covers so they would be discreet. I had no idea the trilogy would become a global phenomenon, or the cover so well-known. If e-readers give women the freedom to read what they want to read, I am all for that.

What message do you think you have conveyed to readers?

Take a risk. Life is for living, and not a dress rehearsal. And love really does conquer all.


Finally, is there anything you would you like to say to all those women who are looking for someone like Grey?

Don’t. Christian Grey doesn’t exist. He is fun, but he is a fantasy. He’s great on the page, but he would be hell to live with in real life. I think we all know that.