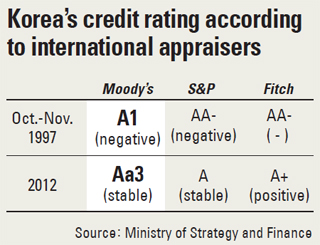 Korea has joined a higher league of global economies as an international credit rating agency upgraded the country’s credit level yesterday to that of advanced economies like Japan.

Moody’s Investors Service raised its sovereign rating of Korea by one notch to Aa3 from the current A1, citing the country’s strong fiscal fundamentals, higher economic resilience and export competitiveness.

The new level for Korea is the fourth-highest investment grade granted by the international agency.

An upgrade in credit rating can help the country borrow money from other countries at lower costs, which will also affect local businesses in a positive way when they trade with foreign banks.

“Korea’s strong fiscal fundamentals enable a relatively large degree of policy space to cope with contingent domestic risks and external shocks. Its government finance metrics are very well placed among all Aa-rated peers,” the credit ratings agency said in an e-mailed statement. “The Korean economy has demonstrated resilience to external shocks. It avoided a recession because of the global financial crisis in 2009 and rebounded strongly in 2010.”

The upgrade came after Moody’s raised its outlook for the country’s national debt to positive in April this year. The agency had maintained the A1 sovereign rating for the country since 2010.

It is significant for the country that one of the world’s three credit appraisers upgraded its credit level despite gloomy outlooks over the economy that is currently facing shrinking domestic demand and toughening external conditions triggered by the euro-zone crisis.

“It is a big achievement for the current government amid continued difficulties in the global economy,” said Eun Sung-soo, the director-general of the international financial bureau at the Ministry of Strategy and Finance.