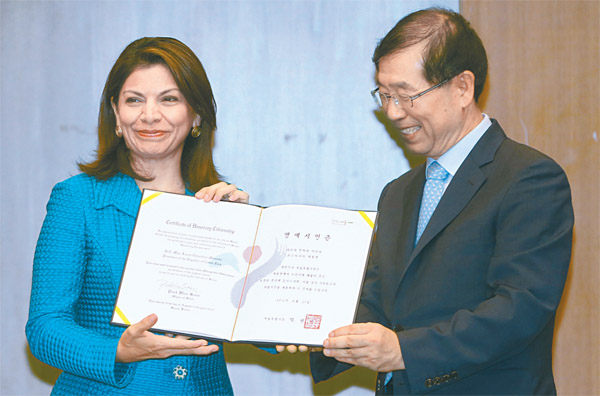 Honorary citizenship is bestowed upon foreigners who have resided in Seoul for more than three years or foreign leaders who visit the city. As head of Costa Rica, Chinchilla received the citizenship based on the standards of greeting a foreign guest.

Chinchilla served Costa Rica as a minister of public security and the National Assembly as a deputy. She became one of two vice-presidents in 2006 and was elected in 2010 as the first female president of the Central American country.

Commemorating the 50th anniversary of diplomatic relations between Costa Rica and Korea, Chinchilla met with President Lee Myung-bak for summit talks on the same day.

Costa Rica ranks second in the world in density of biological resources, per unit area, and has five percent of the world’s plant species. The country ranked first in the Happy Planet Index, an index of human well-being and environmental impact that was introduced by the New Economics Foundation, in 2009 and 2012.

On the previous day, she received an honorary doctorate degree in political science from the Hankuk University of Foreign Studies for having contributed to maintaining public peace, increasing education budgets and her work on the Free Trade Agreement.

At the conferment ceremony, she was recognized for “taking part in economic development in Costa Rica and friendly relations with Korea.”

Chinchilla was invited by Lee and stayed in Korea from Aug. 19 to 22. She spent most of her time inspecting the industrial sector in Korea and also attended the Seoul National University Hospital and Investment Seminar.