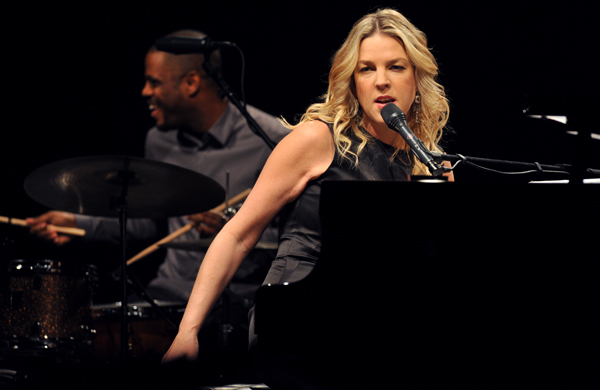 The jazz singer and-pianist tenderly played the standard “Fly Me to the Moon” during a Saturday concert at the Hollywood Bowl.

She once was lucky enough to share a glass of wine with the first man to walk on the moon, Krall said. The former astronaut died Saturday at 82.

“He’s probably thinking, ‘Do I have to listen to that song again?’?”Krall said lightly, after gazing up at the night sky from the stage of the outdoor amphitheater.

The musician, who sent her love out to Armstrong’s family, also had a message for her husband, Elvis Costello.

She performed the classic tune “I’ve Grown Accustomed to Her Face,’’ changing the lyric to “his face,’’ then said she sang it with Costello in mind on his birthday. The rock musician turned 58 on Saturday.