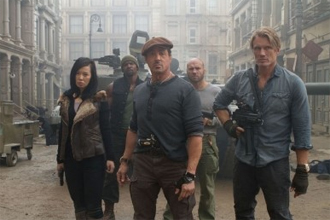 A-list action romp “The Expendables 2” held onto the top rung of the North American box office for a second weekend, keeping “The Bourne Legacy” at bay, industry estimates showed Sunday.

“The Expendables 2”, which stars Sylvester Stallone, Arnold Schwarzenegger and Jet Li as mercenaries, raked in $13.5 million a week after its debut, according to movie tracker Exhibitor Relations.

“The Bourne Legacy” - starring Jeremy Renner as a secret agent threatened by his employers in the latest installment of the popular series that had starred Matt Damon as Jason Bourne - took in $9.3 million for second place. Coming in third, also for a second week in a row, was “ParaNorman,” an animated movie about a boy who can speak with the dead. It earned $8.5 million.

Political spoof “The Campaign,” starring Will Ferrell and Zach Galifianakis, remained in fourth place, with box office receipts of $7.4 million.

“The Dark Knight Rises,” the latest Batman film, climbed back up to fifth place, earning $7.2 million. The final installment in the trilogy directed by Christopher Nolan has so far raked in more than $420 million.

Quirky fantasy-comedy “The Odd Life of Timothy Green” climbed to sixth place a week after its debut, bringing in $7.1 million. “Premium Rush,” an action film starring Joseph Gordon-Levitt as a bike messenger being pursued by a corrupt cop, debuted in seventh at $6.3 million.