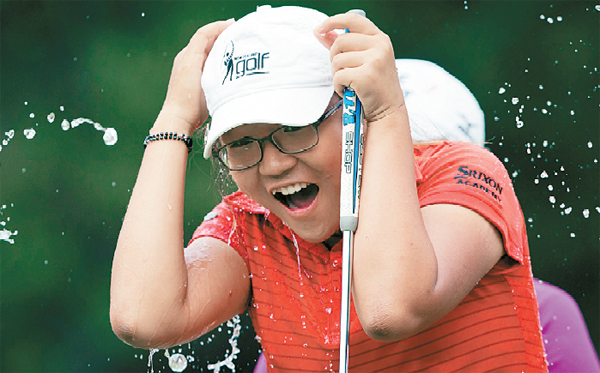 
Lydia Ko won the Canadian Women’s Open on Sunday to become the youngest winner in LPGA Tour history and only the fifth amateur champion.

The 15-year-old Korean-born New Zealander closed with a 5-under 67 for a three-stroke victory. She broke the age record of 16 set by Lexi Thompson last September in the Navistar LPGA Classic in Alabama and is the first amateur winner since JoAnne Carner in the 1969 Burdine’s Invitational.

“To break another record .?.?. it’s amazing, and it’s always awesome to play with the pros,” Ko said.

In January, Ko won the New South Wales Open in Australia at 14 to become the youngest player to win a professional tour event, a mark broken by 14-year-old Brooke Henderson in June in a 36-hole Canadian Women’s Tour event in Quebec.

Ko also won the U.S. Women’s Amateur two weeks ago in Cleveland. “I didn’t cry after this one,” said Ko, but (after) that one I did cry,” Ko said. “Yeah, to me, U.S. Amateur is a big event, and obviously this is a huge event as well. But still, as an amateur winning one of the biggest amateur events, I feel like it was a better win - even though this one was awesome.”

Ko finished at thirteen-under 275 at The Vancouver Golf Club, pulling away with birdies on five of the first six holes on the back nine. She opened with consecutive 68s and shot a 72 on Saturday to take a one-stroke lead into the final round.

Korean Park In-bee shot a 69 to finish second. Park chipped in for birdie on the final hole, and Ko closed with a bogey to make it closer.

“The pressure she was handling is really amazing,” Park said. “I’m really happy for her. It’s great for her career - and I think I was just lucky to get the winner’s check today.”

The glove Ko wore in the final round will be displayed in the World Golf Hall of Fame.

“To have something that’s mine to be up there, it’s amazing, and it doesn’t come down or anything,” she said. “So it will always remain there, and it’ll be a good memory.”

Ko plans to remain an amateur and go to college in the United States, possibly at Stanford.

According to the governing body in her homeland, Ko’s victory in the Canadian Women’s Open on Sunday was the “most significant” event in New Zealand women’s golf.

“No New Zealand woman has ever won on the LPGA tour before and in terms of significant golfing achievements this is probably the most significant by a New Zealand female golfer,” New Zealand Golf (NZG) chief executive Dean Murphy said.

“It’s not unexpected, but she does just dazzle us every time she plays. To win on the LPGA Tour, against a quality field is just a stunning achievement. We are so delighted.”

Murphy said a NZG conference for golf club managers had been interrupted as people huddled around computers watching Ko’s progress over the Internet. He said he expected her victory would give the sport an enormous boost.

“They have seen what Lydia has done and (to think that) any Kiwi girl can do that is inspiring. But this is a very big deal for us and should do wonders for the profile of golf.”

“She is very set in what she wants to do and we’re right there to support her.

“The idea is to get her to play as many professional events as she can (about seven to 10 a year) and get as much experience so when she does turn professional in a couple of years she is ready to go.

“But she is (already) clearly performing on a very high level and we have just got to keep that growth going in the lead up to her turning professional.”