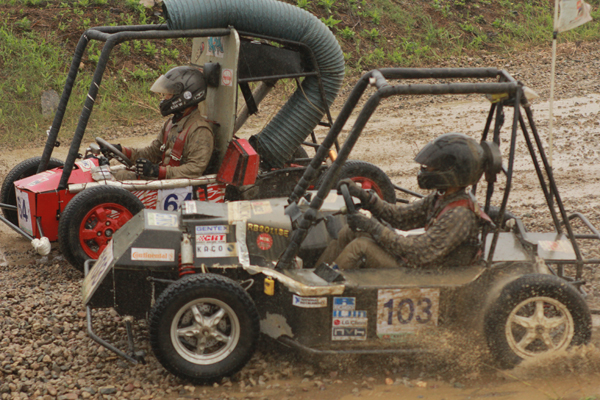 College students compete at the 2012 KSAE Baja & Formula on Saemangeum Gunsan Motor Racing Course in Gunsan, North Jeolla, on Friday. The event, which requires university students to plan, design and build their own vehicles, is the largest home-made car-racing competition in Korea. It started in 2007 and has served as a platform for college students to demonstrate their prowess in this field. Provided by the Korean Society of Automotive Engineers


GUNSAN, North Jeolla - Korean students’ passion for automotive engineering stands as a beacon of hope for the future of Korea’s auto industry, according to Kim Se-woong, president of the organizing committee of a domestic racing event that focuses on cars’ performance, design and technology.

This year’s KSAE Baja & Formula, co-hosted by the Korean Society of Automotive Engineers (KSAE) and Korea Automobile Manufacturers Association (KAMA), will serve as a crucial stepping-stone to help college students experience building automobiles, said Kim, who also serves as a professor of mechanical engineering at Kumoh National Institute of Technology.

The first edition of the event in 2007 featured just 70 teams from 49 colleges, but this year both almost doubled in number, indicating greater interest from college students.

In the Baja category, one of three parts of the competition, judges evaluate students’ off-road vehicles in terms of acceleration and endurance, while in the Formula category, the focus is on the speed and performance of on-road vehicles. The other category deals with car design and mileage.

The winning team, Kora 46, was given a KSAE Grand Prix award and 5 million won ($4,400) in cash. Other teams will get to visit companies overseas and display their vehicles at next year’s Seoul Motor Show.

Hyundai, Kia, GM Korea, Renault Samsung and Ssangyong sponsored this year’s event along with a number of auto parts manufacturers.

Meanwhile, the city of Gunsan in North Jeolla, located about 300 kilometers (186 miles) southwest of Seoul, said it will reinforce its support.

The city is home to GM Korea’s plant and Daewoo’s truck assembly plant.

Kim shared his thoughts on the competition, which ran from Wednesday to Friday last week, with the Korea JoongAng Daily in a recent interview.

Q. How does KSAE Baja & Formula relate to the domestic automobile industry?

A. The event has become a field training center to educate future automotive engineers. Students plan, manufacture and evaluate their vehicle’s performance. From that process, they learn more about the subject, and that experience will be invaluable when they enter the industry.


What has been the biggest challenge in developing the event?

I really wanted the winners of this event to have some kind of an advantage in terms of landing a job in the automobile industry, and I hoped they would get support from the corporate sector. This finally started to happen last year, when companies began offering incentives to winners. Hyundai has now launched a separate recruitment drive just for participants in KSAE Baja & Formula.

Is Korea doing enough to educate students in this field?

Over 80 colleges and universities now offer related courses, and I think our nation’s automotive engineering education is now pretty much world class. Korea is the world’s No. 5 producer of automobiles, and that directly links to the education offered here. But we are still lagging in some core technologies so we should work harder.

What future do you see for Korea’s automobile industry?

There should be a lot more interaction between schools and businesses to aid students’ progression. This event is just one example of how the KSAE has been supporting schools, and, as you can see, the passion they show is nothing short of amazing.