From Infiniti to beyond as new diesel hits market

From Infiniti to beyond as new diesel hits market 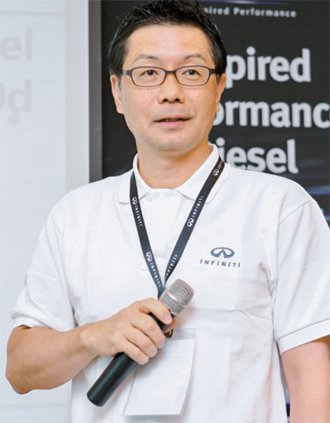 Infiniti, the luxury arm of Japanese auto giant Nissan, is hoping to stir up the diesel-dominated market for imported cars and recoup lost sales in Korea with its new M30d.

The vehicle, which was released yesterday, is the first diesel-fueled sedan by a Japanese automaker to be sold in Korea as Toyota and Honda have yet to release a diesel in the country.

The M30d was first released in Europe in 2010, but its Korean debut marks its arrival in Asia.

Kenji Naito, the head of Nissan Korea, said on Friday at a test-driving event in Incheon, that the company’s models for sale in Korea include more high-tech options as standard features than are available in European versions.

“We stressed the importance of the Korean market to our headquarters [in Japan] and this is why we can set a [competitive] price,” Naito said. “We have no option but to succeed with the M30d [as] … our fate may depend on how well this model fares.”

Infiniti has been hit with sluggish sales this year. According to the Korea Automobile Importers & Distributors Association (Kaida), the brand only sold 642 vehicles from January to July, less than half the number sold in the year-earlier period.

Naito said Infiniti has been dealt a severe blow by the high Japanese yen, which makes its exports less affordable, but that the high quality of its brand will see it through the storm. He added that he has targeted monthly sales of at least 70 units in Korea. 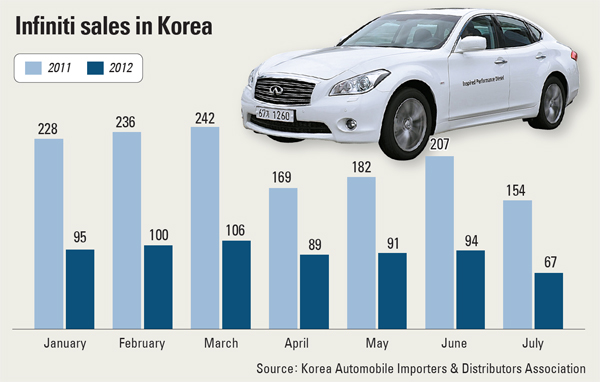 “Korea is a unique market in Asia, because diesels are so popular here,” he said. “Infiniti thought its main weapons would be its 3.7-liter gasoline models, but as the conditions in Korea’s auto market have changed, we decided to push forward with our diesel line-up.”

Koreans snapped up 30,533 imported diesel cars in the first half of 2012, with sales edging gas-powered passenger cars by about 1,000, according to Kaida. They owned 49.1 percent of the import market over the six-month period, up 15.4 percent from 2011, it added.

Infiniti introduced its FX30d, a diesel-based SUV, in Korea in February. But Naito said the company is expecting a more positive response to its M30d, which he sees as a realistic challenger to BMW’s 520d and Audi’s A6 TDI.

Like the Audi, the M30d comes equipped with a 3-liter engine, whereas the 520d only comes in a 2-liter version. The latter emerged as the most popular foreign car in Korea from January to June with 4,466 units sold.

Naito said Infiniti is considering bringing more diesel models to Korea later, but for now it will focus on selling its M-Series sedans and FX diesels.

“Infiniti’s brand image was built around its G-Series, but we want to now enhance the brand image with the M-Series,” Naito said. “The M30d will be a stepping stone for us to emerge as one of the top three luxury automobile brands here.”