Ignorance of patents may spur avalanche of suits

Ignorance of patents may spur avalanche of suits 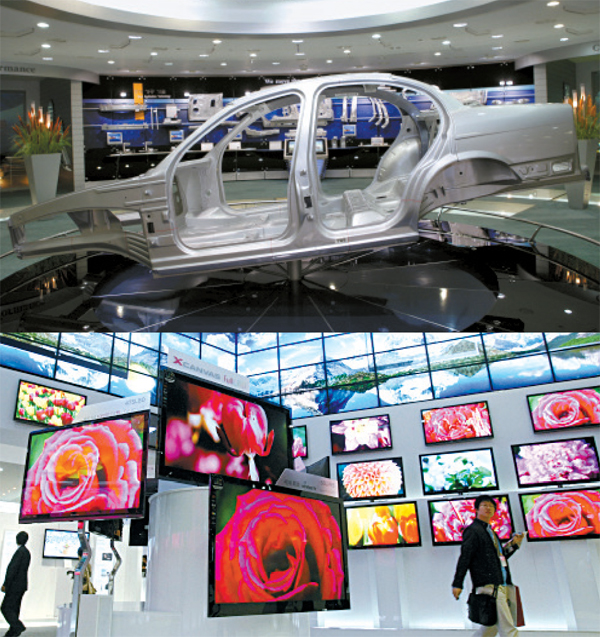 Top: A model of a vehicle body made of steel by Posco exhibited at its research center in Gwangyang, South Jeolla. Bottom: LG Electronics’ LED televisions displayed at an exhibition in Seoul.


Including the so-called “patent war of the century” between Samsung Electronics and Apple, Korean businesses are increasingly becoming embroiled in legal disputes with their foreign rivals over patent breaches due to their increasing presence in the global market based on their technological prowess.

According to the Korean Intellectual Property Office (KIPO) yesterday, the number of patent infringement suits involving domestic companies has risen consistently since 2004, recently climbing above 100 a year.

KIPO’s statistics suggest that Korean companies feel more threatened by foreign rivals than the other way around. The number of local firms accused of copying foreign competitors’ technology or products stood at 726 of 891 cases as of last year, while reverse infringement cases totaled just 165.

Amid the epic struggle taking place in the field of smartphones and mobile gadgets, experts say Korean businesses should brace for more patent battles with their global rivals.

“Patent ownership was not considered particularly important in Korea until recently, because Korea is a manufacturing-based country, where tangible assets are deemed more valuable than intangible ones like intellectual property,” said a local patent lawyer, who requested anonymity.

“Korean companies might face difficulties or risks when they go abroad without changing the way they think about intellectual property,” he added. 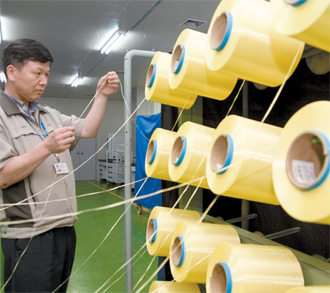 An employee checks the quality of Heracron aramid fiber developed by Kolon Industries at its plant in Gumi, North Gyeongsang. Provided by the companies

The three-year tussle between Kolon Industries, Korea’s synthetic fiber manufacturer, and U.S. chemical giant DuPont over the development of an aramid fiber, a high-strength material used in bulletproof vests and helmets, stands as a case in point.

“Kolon’s overseas growth has been stunted due to the legal fight with DuPont, just as we were poised to expand globally with our own Heracron brand of aramid fiber after three decades of research and development,” said Park Jong-tae, who heads the company’s Heracron division.

A district court in Virginia ordered Kolon to pay what amounted to the highest level of compensation ever recorded in a patent suit in Korea’s history prior to last Friday’s Samsung-Apple verdict.

Kolon was charged with stealing trade secrets from the U.S. chemical producer last November and the court accepted a jury’s verdict that Kolon must pay $919.9 million in damages.

Kolon was found to have willfully and maliciously stolen trade secrets and confidential information regarding DuPont’s trademarked Kevlar para-aramid fiber. The compensation amounts to about 71 percent of Kolon’s total assets, according to the financial industry. Kolon is appealing the ruling.

The legal dispute began in 2009 when DuPont filed a complaint claiming that Kolon, a newcomer to the aramid fiber market, had violated one of its technology patents. DuPont alleged that Kolon hired some of its former employees in 2008, and they provided it with confidential information about the material.

Kolon countered that the allegations were groundless, and that DuPont was merely trying to force Kolon out of the market. It filed a separate antitrust suit against DuPont the following year that went to trial this April.

But the U.S. court turned down Kolon’s argument that DuPont abused its power by forcing large textile providers to fill up to 80 percent of their warehouses with DuPont’s product by signing multiple-year contracts. Kolon appealed the ruling on July 30.

The likelihood of Korean companies winning such patent cases against companies from more advanced countries stands at 26 percent, according to the KIPO. In contrast, Swiss companies have an 85 percent chance of success, U.S. firms have a 59 percent chance of winning similar suits and French enterprises 51 percent, it added.

“Except for conglomerates like Samsung, most local firms haven’t paid much attention to protecting their intellectual property rights or patents, but because of the rise in patent cases involving Korean companies, they are becoming more informed,” said Cho Kyu-hwan, a spokesperson at KIPO.

“It is becoming more urgent for businesses that aim to contend with foreign rivals to set strategies about possible patent conflicts,” he added.

In the steel industry, Posco is wrestling with its former partner Nippon Steel in a suit estimated to be worth 1.4 trillion won ($1.23 billion).

In April, the Japanese steelmaker applied for an injunction to ban sales in Japan of its Korean ally’s steel plates for electric vehicles with a court in Tokyo, and filed a patent infringement suit in June. Industry insiders believe Nippon Steel’s move is designed to keep Posco from expanding its share of the global E-V steel market as the Korean steel firm turns its eyes from traditional steel products to high value-added E-V steel plates in the midst of a global recession in the industry.

Meanwhile, LG Electronics and Samsung became involved in a battle with Osram over infringement of patents regarding the latter’s LED technology in five countries including Korea, the United States and Germany. Samsung agreed to settle in early August but LG is still battling on.