Soldiers from China’s People’s Liberation Army Special Operations Forces march in formation during a training session at the 60th National Day Parade Village on the outskirts of Beijing on Sept. 15, 2009. [REUTERS/YONHAP]


Ever since China launched its five-year national project in 2002 aimed at incorporating Korea’s ancient kingdoms into part of its own history, tension has become more intense between the two countries.

Despite 20 years of diplomatic partnership, which significantly increased bilateral trade and investment, China’s claims on Korea’s ancient history have not only raised concerns over a distortion of the past, but over a rebirth of Sinocentrism, a form of ethnocentrism in which people from China think of their country as the most important place in the world.

“Even after the project officially ended in 2007, China has continuously promoted research and study into the areas where currently many ethnic minorities live [including the Goguryeo area located across what is now the northern Korean Peninsula and southern Manchuria],” said Lee Ji-yong, professor at the Institute of Foreign Affairs and National Security.

“Korea should stand against such moves by establishing countermeasures as a long-term strategy.”

Despite years of strong protest from Korea, China has continuously raised awareness to its people and to the international society by including related information in leaflets at museums.

The two countries celebrated their 20th anniversary of diplomatic ties last Friday. However, a consensus was made among Korean experts that though improvement has been witnessed in areas like trade and culture, issues involving security and history still need to be resolved.

In the latest move by China, controversy arose in June when Beijing announced the Great Wall extended farther than previously thought. China’s State Administration of Cultural Heritage said the Great Wall was more than twice the length it had been considered in the past, reaching into Korea’s old northern kingdoms including Goguryeo (37 BC to 668) and Balhae (698-926). This drew criticism from scholars here that China is using history to diminish neighboring countries to rediscover its glorious past. Balhae succeeded Goguryeo, one of Korea’s three ancient kingdoms.

“The launching of China’s Northeast Project has begun a history conflict, and it will take a long time to sort things out,” said Ko Kwang-eui, a senior researcher at the Northeast Asian History Foundation. “The most ideal way to solve the issue would be to promote joint studies and projects.”

Experts in Seoul say that the launching of the project was closely related to its ethnic policy that stresses harmony and equality of all 56 ethnic groups, including the dominant Han.
The establishment of diplomatic ties with Korea in 1992 also prompted China to gain more awareness of its ethnic groups in the three provinces in the northeast - Heilongjiang, Jilin and Liaoning - where many ethnic Koreans live. The official diplomatic partnership would allow ethnic Koreans in China to have more personal exchanges with Koreans, which could raise identity problems among them, playing against China’s unity policy in general.

“Internally, the Chinese government would have felt an urgency to achieve complete national and territorial integration by reinforcing its control over ethnic minorities and to promote their identity as Chinese nationals,” said Yoon Hwy-tak, professor of Hankyong National University.

“Externally, the government would have recognized the need to refute the argument to reclaim lost territory advanced by some in both South and North Korea.”

A year before China launched its Northeast Project, a special bill was submitted to the South Korean National Assembly concerning the legal status of ethnic Koreans living in China.

Meanwhile, North Korea had also submitted a document to register a group of Goguryeo burial mounds on the United Nations Educational, Scientific and Cultural Organization’s World Cultural Heritage list, a move which was protested by China and delayed until now.

Korean historians note that if the Goguryeo relics did make it onto the World Cultural Heritage list, China would lose its say over incorporating Goguryeo as part of its own history, which encompasses the unified multinational country theory. China’s view is that anything that once happened in its present territory also belongs to its cultural history.

According to Korea’s Northeast Asian History Foundation, however, it’s clear that Goguryeo was founded by the Yemaek tribe that founded Gojoseon, Korea’s first state, as also detailed in Chinese records.

“Nevertheless, suddenly, denying all these historical views can be read as interpreting history arbitrarily according to present needs and purposes,” the foundation in Seoul states on its Web site.

What historians at the Chinese Academy of Social Sciences argue is that the history of Goguryeo is separate from the history of Korea’s three kingdoms. They claim that Goguryeo was founded by ancient Manchuria and that two-thirds of Goguryeo’s territory is currently located in northeast China.

Amidst the conflict, in 2004, vice ministers of Korea and China agreed to a verbal memorandum of understanding that includes China putting out efforts not to make too much of the issue of the history of Goguryeo based on political intentions and approach studies with the purpose of academic research.

The MOU came after Korea strongly complained about how the Chinese Foreign Ministry officially posted the history of Goguryeo as being part of its own history.

The MOU, however, was not convincing enough as China kept disseminating to the public the logic of China’s Northeast Project in diverse routes. President Roh Moo-hyun had requested in 2006 that China implement the memorandum faithfully, but the conflict still continues. 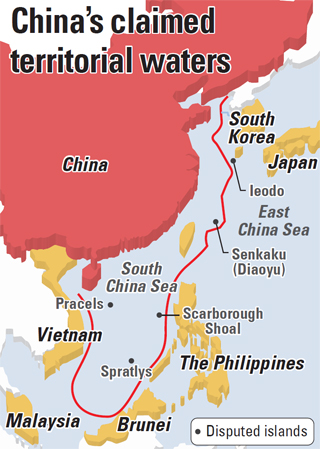 It’s not only Korea that is worried about the growing claims by China to expand its influence. Other countries neighboring China are also expressing concerns over how China is arguing superiority over them, which may signal the resurrection of Sinocentrism, a concept that justified its hegemonic supremacy over neighboring countries in the past.

In recent years, China has been involved in a growing number of maritime water disputes, not only with Korea and Japan on the North China Sea but also with Southeast Asian nations including Vietnam, the Philippines, Malaysia and Brunei on the South China Sea.

In March, China’s State Oceanic Administration once again claimed that the disputed Ieodo is in the waters that would be patrolled by the Chinese Navy and Air Force, raising tension between the two countries.

Ieodo, which is located 149 kilometers (92 miles) from Korea’s Mara Island, lies in Korea and China’s overlapping exclusive economic zone, but it is located nearer to Korea, which built the Ieodo Ocean Research Station in 2003. Japan is also in a tug of war with China over Japan’s Senkaku islets, which are called Diaoyu in China.

Tensions are even deeper on the South China Sea over the uninhabited islands of the Spratly and Paracel archipelago, between China and some Southeast Asian countries. The disputes also involve the United States, which analysts say would turn into a battle for supremacy.

China has claimed territorial sovereignty over the Paracel and Spratly islands in accordance with the United Nations Convention on the Law of the Sea, but the Association of Southeast Asian Nations also has respective claims that overlap with China and each other.

Early this month, the U.S. strongly criticized China, saying that “China has refused to resolve these issues in a multilateral forum.”

Expressing concern over Sinocentrism, Aaron Friedberg, professor at Stanford University, also stated that Chinese leaders believe the country should be strong on the outside to maintain internal stability, and that China’s assertion that it will not pursue dominance in the Northeast Asian region is merely talk.

Global concerns grew even more in March over China’s possible roadway to hegemony when the Chinese government said it will boost military spending by 11.2 percent this year compared to the previous year.

Korean scholars and historians say conducting joint research is a must to freely share ideas and studies on historical documents and relics. In 2005, Korea and China launched its first academic meeting, hoping to hold it every year to discuss matters of history.

However, the last meeting of its kind was held on Jeju back in 2008 because “Chinese scholars participated in the meeting with illogical reasoning based on political grounds.”

“We considered the meeting to be something pure, sharing ideas on history based on logic and evidence,” said Ko from the Northeast Asian History Foundation. “The Chinese side, however, took it very politically as if they were participating in the meeting to fulfill its goals of the Northeast Project.”

Ko said that Korea ever since has called on China to resume holding the joint academic meeting. However, China hasn’t responded to the request yet.

“History is an issue that cannot be solved politically,” Lee from the Korea-China Friendship Association said. “Scholars should hold in-depth discussions together based on sufficient research to solve history problems.”