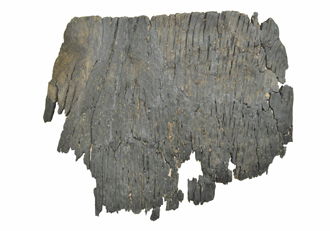 A fragment of the Neolithic boat unearthed in Uljin, North Gyeongsang. Provided by the Samhan Institute of Cultural Properties

The world was a lot different 8,000 years ago, but some things remained the same. People got onboard boats, tugged on oars and fished for a living. And the latest discovery on the Korean Peninsula is the proof.

The remains of the fishing boat and a wooden oar, believed to be from the early part of the Neolithic period (8,000 BC-1,000 BC), has been unearthed in Uljin, North Gyeongsang - some 330 kilometers (205 miles) southeast of Seoul, the Samhan Institute of Cultural Properties said yesterday.

In fact, the remains of a boat and an oar from the Neolithic Period were previously discovered in Korea - in Changnyeong, South Gyeongsang in 2005 - but the recently found artifacts are believed to be the oldest of its kind ever discovered in Korea as well as in the entire world, according to the local research institute.

The remains were originally uncovered in May 2010 by the researchers of the Samhan Institute as the discovery site was part of the city redevelopment project site initiated by the Uljin County government. But researchers didn’t discover how old they actually were until recently.

“The boat fragment and the oar were at first taken from the site of discovery as an entire lump of earth, since both were badly corroded and their shapes were hard to recognize,” said Kim Ku-geun, the institute’s director. “We were able to identify exactly what these artifacts were while we were treating them for preservation.”